A Brief History of the Chinese of Las Vegas: Part II

Beginning in the 1950s to 1960s the new immigration laws and the civil rights movement opened new opportunities for Chinese Americans in entertainment, gaming, local government, education, and other areas.

In 1952 Joe Shoong (1879-1961,) one of the first Chinese American millionaires and whom “Time Magazine” called “the richest and best-known Chinese American businessman in America,” opened National Dollar Store in Las Vegas on Fremont Street opposite J. C. Penney’s as part of his chain of 55 stores. The popular store, closing in the 1970s, appealed to the low and middle-classes and had Caucasian salespeople and Chinese American managers. Shoong delegated the development of his Las Vegas properties to his son-in-law Richard Tam (1916-1999,) a Hawaiian-born land developer who was known for his projects around the Station Casino on Sahara Avenue and who opened his Town Hall Hotel and Casino (1985-1999) on Koval Lane. The Joe Shoong Park and Richard Tam Park honor each of the men.

Las Vegas soon became known as Sin City to some and gained international fame as the world’s entertainment capital. Chinese Americans and Chinese from abroad were so numerous that many casinos featured Chinese restaurants.

After World War II, Chinese entertainers became popular. Carson City-born Hazel Huey Lee dreamed of being a Las Vegas showgirl and her dream came true in the 1950s. GIs and others who visited Asia in the 1940s and 1950s enjoyed the Asian American performers like the Tong brothers at the Sahara and the numerous Chinese Americans entertainers at the Flamingo and other hotels. By the 1970s, some Chinese entertainers were headliners at the major casinos, especially during Chinese New Year’s (in January or February, according to the lunar calendar).

Flamingo and Sahara signs at The Neon Museum.

“Flower Drum Song” was featured at the Thunderbird and its popularity continued more recently at the Union Plaza. “The World of Susie Wong” was also popular. In the 1950s the Thunderbird Hotel also featured Hawaiian-born Frances Fong in the China Doll Revue. China-born Gia Mo, who performed at the Dunes, was one of the few strippers but Chinese American strip-tease acts had become popular in Winnemucca-born Charles Low’s famous Forbidden City nightclub in San Francisco. 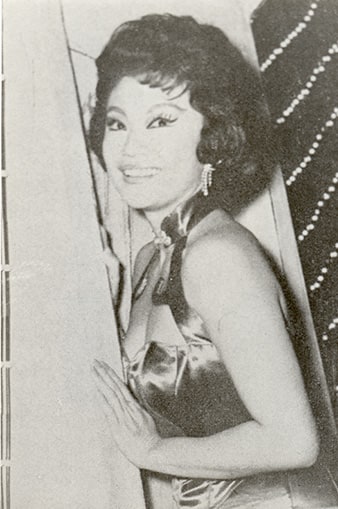 Beginning in the 1970s there was an increase in population and the growth of Chinese American businesses. Caesar’s Palace and other major casinos hired Asian entertainers, especially from Hong Kong and Taiwan, for a brief appearance during Chinese New Year’s as an enticement to the Asian gamblers. By the 1980s all of the major Las Vegas Strip casinos had fantastic Chinese New Year decorations and attractions. Chinese games were adapted and adopted in major casinos. Keno, pai gow, a type of domino game, and “high-low,” a dice game, all could be found in major casinos.

There were many Chinese Americans who contributed to life in Las Vegas but only a few are mentioned in this essay. In 1997 Theodore Bo and Doris Shoong (1919-2018) Lee and sons Gregory and Ernest, took over the Eureka Casino on Sahara Avenue then turned it over to the employees in 2015 but continued the family ownership of Eureka Casino and Hotel in Mesquite. Ted, a Harvard alumnus who served on the prestigious Harvard Board of Overseers, was an attorney by training. Ted and Doris were very active in the community, supported UNLV and the Las Vegas Symphony, and owned the Urban Land Development Company, which was active in Nevada, California, and elsewhere in the west. The UNLV Lee Business School is named in their honor. Their sons, Greg and Ernest, have carried on the Shoong-Lee tradition of being active in the community and serving on numerous boards. 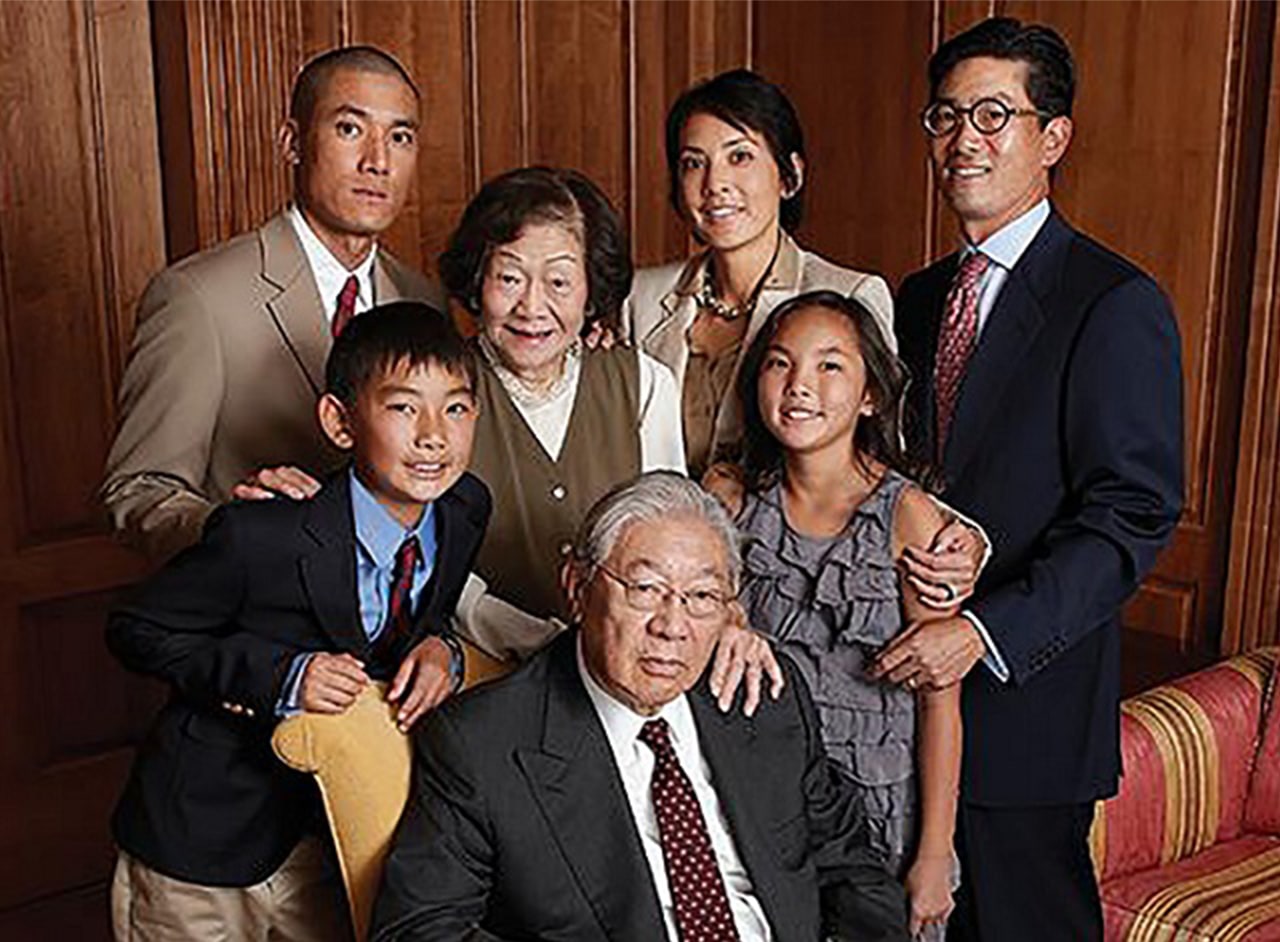 Caption:  Right to Left: Gregory and Dana Lee, daughter Kathie, Doris and Ted Lee, and Ernest and Greg’s son Graham have been involved in real estate development, casinos, and other enterprises in Las Vegas and parts of California. Credit: Aaron Mayes/UNLV Photo Services

Caption:  The Eureka Casino at 595 East Sahara, featuring the restaurant “Fat Choy,” was owned and operated by the Lee family until 2015, when they turned over ownership to the employees as one of the few 100 percent employee-owned casinos.  They kept the Eureka Casino and Hotel in Mesquite. Source: Author

Wing (1926-2005) and Lilly Fong (1925-2002) made numerous contributions to Las Vegas, especially in banking, business, land development, and philanthropy.  Wing came to work with his uncles in the restaurant business in 1939 and in 1950 graduated from Woodbury College in Los Angeles with a business degree.  Arizona-born Lilly was an elementary school teacher who met her husband in Los Angeles when they were in college.  Lilly became the first public school teacher of Asian descent in Clark County and the first Chinese American elected to the Board of Regents of any American university (served 1984-1994). In 1955 Wing opened Fong’s Garden, popular for its Chinese dishes, on Fremont and Charleston in the hopes of establishing a commercial Chinatown. He was active in numerous clubs and a director of Nevada State Bank (opened 1967), major stockholder of Frontier Savings and Loan (c. 1964-1990) as well as many real estate projects. They were active in the community and very supportive of the university, which included funding a computer center in the UNLV business college (1987), and Vegas PBS.  The UNLV Lilly Fong Geoscience Building was named in her honor. Among the many honors they received was the naming of the Wing and Lilly Fong Elementary School in 1992. 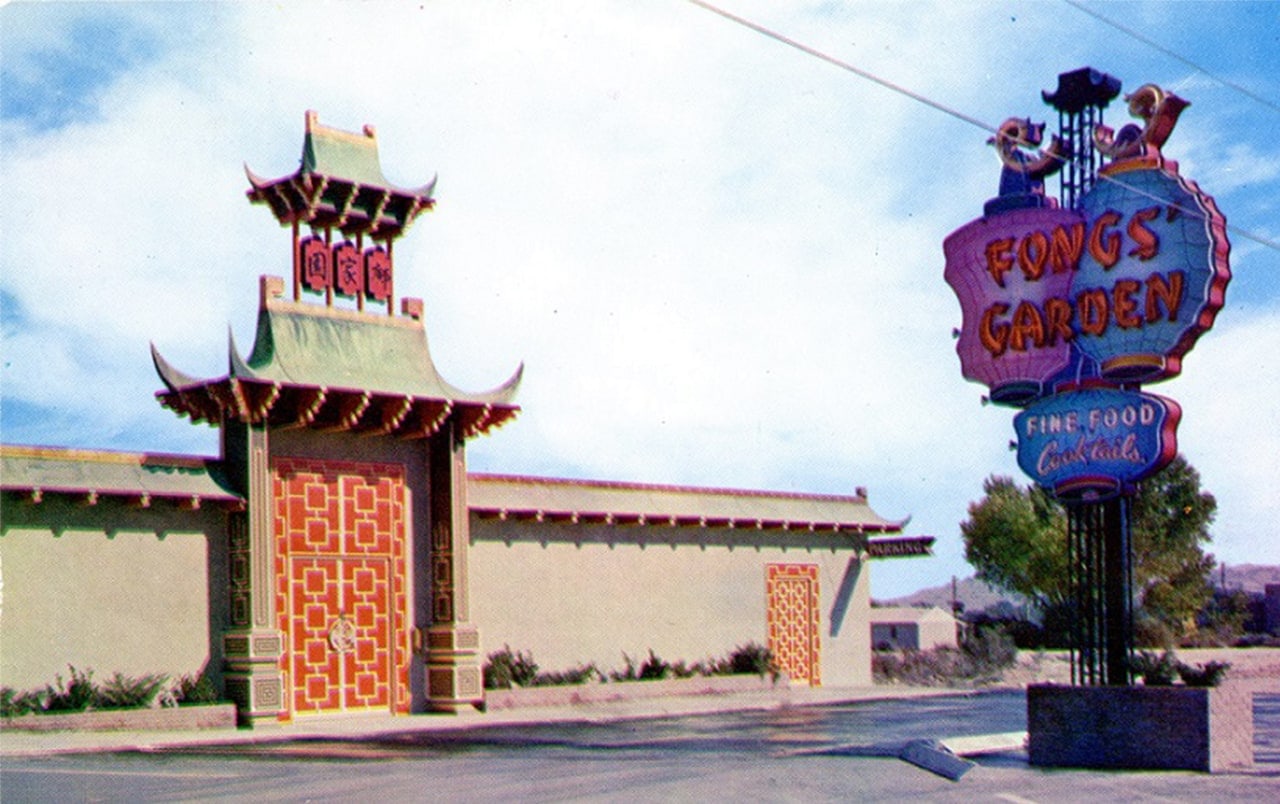 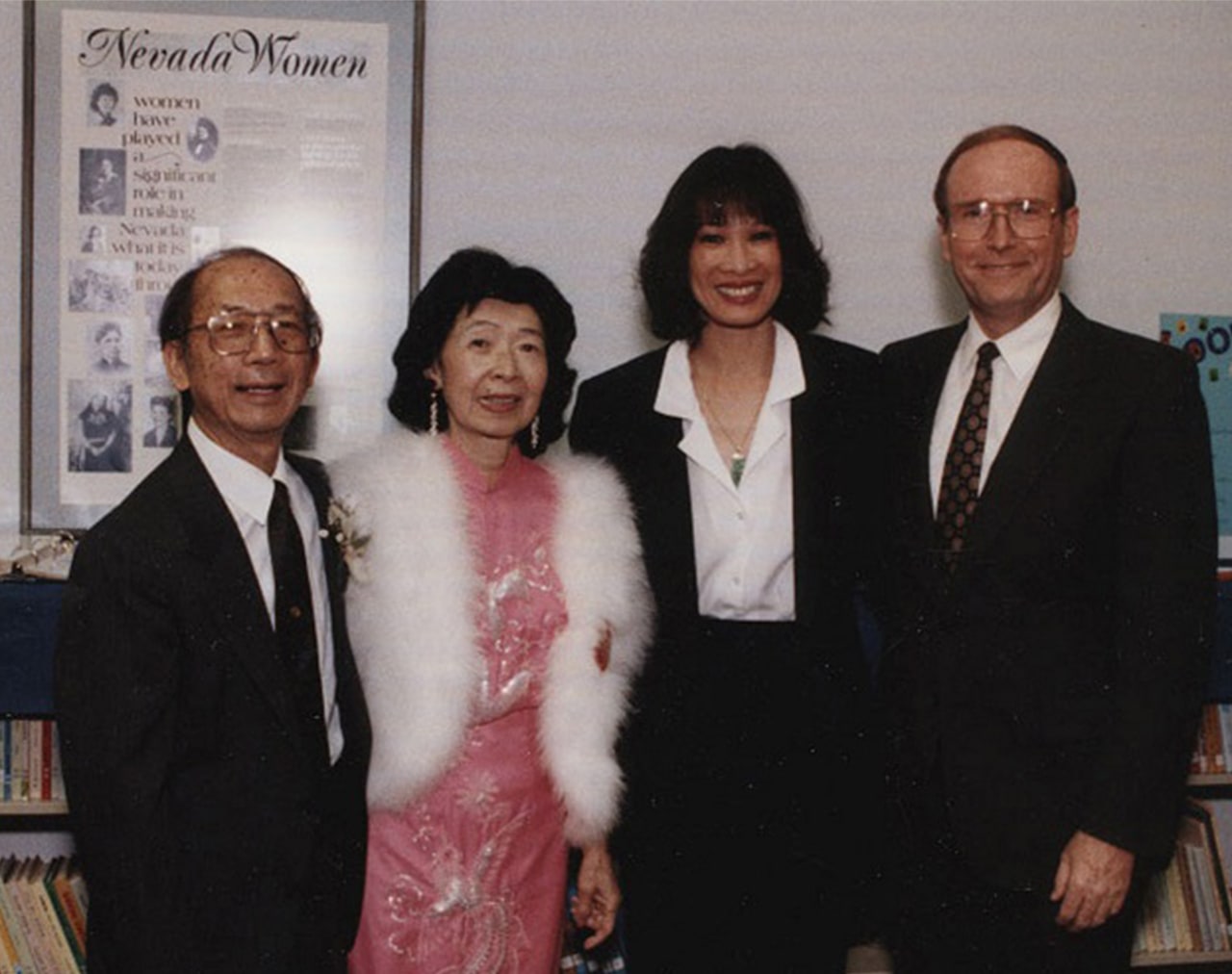 Caption: Joined by Senator Richard Bryan and Secretary of State Cheryl Lau (right), Wing and Lilly Fong (left) attended the opening of the Wing and Lilly Fong Elementary School in 1992. They have the UNLV Business School Computer Center named in their honor as well as the UNLV Lilly Fong Geoscience Building. Source: Author

In 1990, Buck Wong broke ground for his engineering firm of Arcata Associates, Inc. Wong’s firm, which was started in 1975 in California, had over three hundred employees when it opened in North Las Vegas. The firm had contracts with Nellis Air Force Base as well as the FAA, NASA, and space programs in Texas. Wong's role as a business leader eventually led to his election as president of the North Las Vegas Chamber of Commerce in 1994. After his recent retirement, his son Lawrence “Tim” Wong assumed the leadership of the company, assisted by sister Nancy. All are active in the community.

In February 1995 a new Las Vegas Chinatown development opened on Spring Mountain Road, west of the Las Vegas Strip. This modern development, the only Chinatown in the state, represented a new concept combining both commercial and cultural attractions. There were several Asian restaurants, a Chinese bakery, a supermarket carrying fresh produce and foods from all over Asia, as well as a number of specialty shops. Chinatown has been the site of Pan-Asian festivals and performances. It has proven to be a great success, attracting not only Asian Americans but also Euro-Americans, who can learn about Chinese culture and traditions from display boards placed throughout the shopping complex and special programs. Asian businesses sprang up on Spring Mountain both east and west, making it a commercial center for Asian Americans.

Chinatown is a complex of Asian restaurants, shops, and other businesses on Spring Mountain Road near Arville. Its proximity to the Las Vegas Strip makes it a tourist destination. Cultural activities often are featured as this statue of the famous fable, “The Monkey King” and there are annual Chinese New Year’s celebrations. Going east and west for several miles along Spring Mountain Road, other Asian businesses opened and offer a variety of experiences. Source: Author

In 1990 Hawaiian-born attorney and music professor Cheryl Lau was elected Secretary of State, the first Chinese American to hold that honor, but was an unsuccessful candidate for the Governor and later Congress. She continued her career in many commissions and other positions.

By the 1960s and 1970s, an Asian American identity was forged but at the same time, with the increasing influx of new immigrants from all over China as the result of new immigration laws, the preservation of different separate national and regional identities was advocated. Many achievements were made. In the area of restaurants, Wynn’s Wing Lei Restaurant was the first Chinese restaurant in North America to receive a Michelin Star. Chinese Americans experienced some of the discrimination related to the bamboo or glass ceiling, but have been able to make greater and greater achievements in all fields as the decades passed. Ely-born and Las Vegas-educated Kathleen Ong married Stephen F. Sisolak in 2018 and became First Lady of Nevada in 2019. By the 1970s there was a growing acceptance of multiculturalism and minority rights but the battle against racism has continued and in 2020-2021 the violence against Chinese Americans escalated 150 to 250 percent due to then-President Trump’s labeling of Covid-19 as “Kung-flu” or “China flu.” With the growing number of multi-ethnic citizens (Las Vegas has one of the highest in the nation,) a greater acceptance of people of different cultures and ethnicity must be fostered. 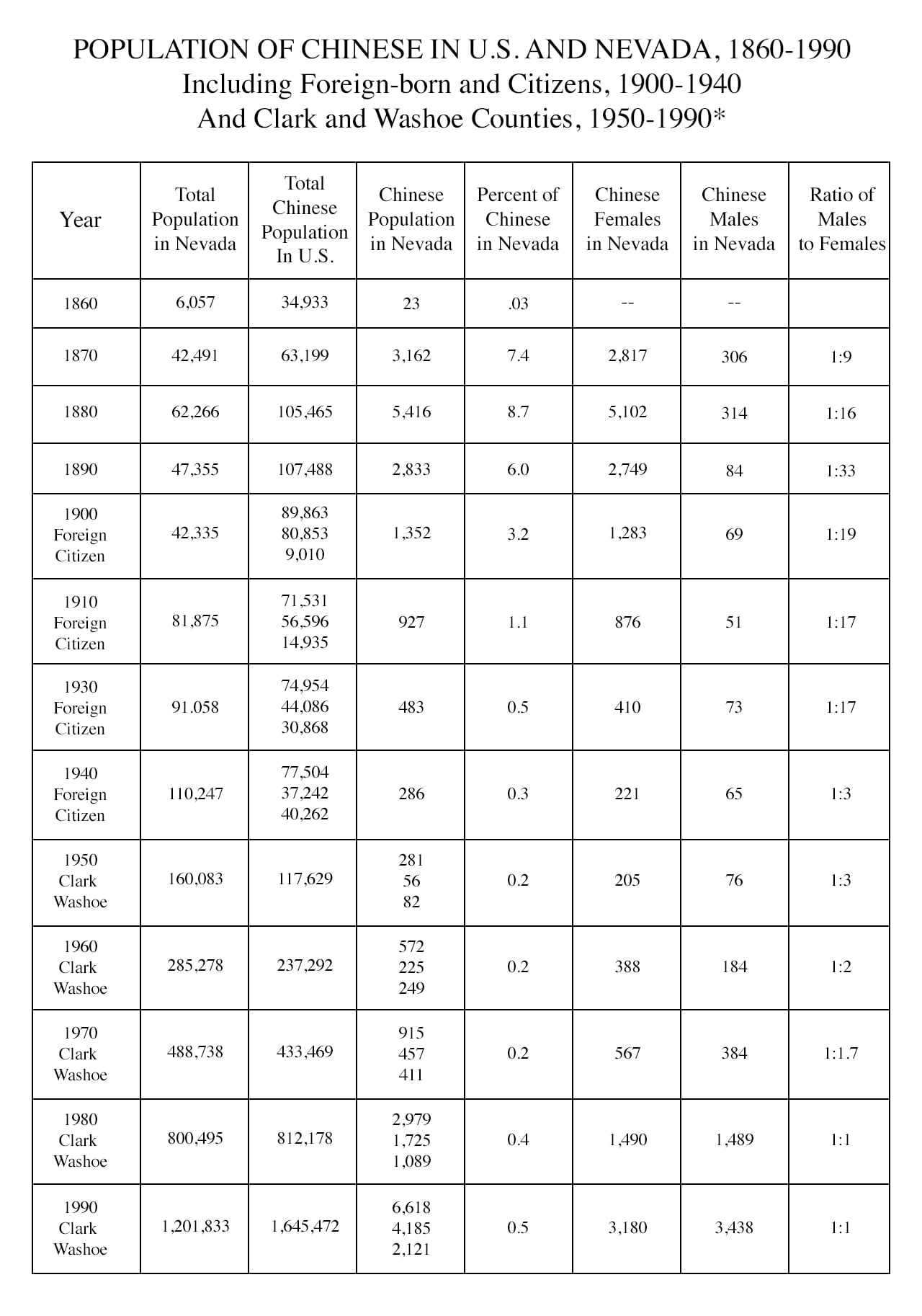 *From the U.S. Census Bureau. The censuses after 1940 do not separate foreigners from citizens. The census data beginning in 2000 changes its categories.

Dr. Sue Fawn Chung was born in Los Angeles, California and graduated from the University of California, Los Angeles, Harvard University, and the University of California, Berkeley. She began teaching history at UNLV in 1976 and retired in 2015 as professor emerita. She has served as UNLV Director of International Programs, Chairperson of UNLV History Department, member of the Nevada Board of Museums and History, Clark County Asian American Commissioner, National Endowment for the Humanities Grants Committee, National Trust for Historic Preservation Advisor, and consultant for the U.S. Forest Service. She has assisted in numerous museum and media presentations, including serving as executive producer of Vegas PBS, “Island Mountain Days.” She won the Bancroft Award for one of her books the Schmeidel Award for Community Service, the Lion’s Club Outstanding Educator Award, and the Nevada Humanities Outstanding Nevadan Award, as well as other recognitions.

Lecturers work with the Education & Outreach department to delve into The Neon Museum collection and develop presentations that have clear connections to the Museum’s mission and Las Vegas history. This project is supported in part, by the Nevada Arts Council, a state agency, which receives support from the National Endowment for the Arts, a federal agency, and the state of Nevada.