The Neon Museum Las Vegas | The history of Las Vegas through neon - After Howard, Before The Mirage

After Howard, Before The Mirage

"After Howard, Before The Mirage: The Early Corporate Era of Nevada Casinos and the Shifting Visual Landscape of Las Vegas" by David G. Schwartz, Neon Museum 2020 Scholar in Residence.

Las Vegas casino history is often divided into the “classic” or “Rat Pack” era and the “corporate” or “megaresort era.” Classic Vegas starts in the early 1950s as the burgeoning gaming industry established itself on the Strip and can be said to end in 1967, when Howard Hughes’ purchase of five casinos signaled the start of a new regime. The megaresort era started in 1989 with the opening of The Mirage, and the time between Hughes’ arrival and Steve Wynn’s game-changer is typically brushed over as a mere precursor to the massive changes of the 1990s.

But the two decades between 1967 and 1988 don’t fit neatly into either period and deserve further consideration in their own right. While some aspects of the “new” Vegas were present, like a focus on larger hotels, many elements of the older Las Vegas remained. Defined more by expansions to existing properties than new resorts, this period saw a shift in the visual language of signage and uses of new technologies and strategies to identify establishments. By studying the early corporate era, we can gain insights into how the designs of casinos evolved in Las Vegas and better appreciate the distinctness of the eras that came before and after it.

The modern era of Nevada gaming started with the relegalization of “wide-open” casino gaming on March 19, 1931. The first gambling halls (they were not nearly so pretentious as to style themselves “casinos”) in both Reno and Las Vegas were tiny, with two to three gaming tables and perhaps a dozen slot machines each. Bingo and keno were also popular forms of gambling.

The first true casino resort on what would become the Las Vegas Strip (then known simply as Highway 91 or the Los Angeles Highway) was the El Rancho Vegas, which opened April 3, 1941. This resort, built by California hotelier Thomas Hull, set the pattern for the first generation of Strip resorts: a central building housing the casino, theater, and restaurants surrounded by rooms housed in several expansive, low-rise buildings. Most of the resorts of the classic period adhered to this model, at least as they were initially constructed, though the Riviera (1955) was a nine-story high-rise and Caesars Palace (1966) had a far more elaborate theme than anything else in town.

From the time of the Riviera onwards, first-generation casinos on the Strip added hotel towers, but retained their basic orientation. Over the next decade, the Sahara, Dunes, Sands, Stardust, and Desert Inn expanded upwards, combining low-rise “garden rooms” with high-rise accommodations.

These bigger facilities required a bigger capital outlay, one beyond the traditional small syndicates (often with links to organized crime-affiliated individuals) that owned most Las Vegas casinos. The Sands, which opened in late 1952 with 200 rooms, cost $4.5 million to build. The Riviera cost $8.5 million, and the Tropicana, which debuted in 1957 with only 300 rooms, $15 million. The $19 million it cost to build Caesars Palace represented the limit of traditional finance in Las Vegas—even with a pipeline to the Teamster Central States’ Pension Fund, scraping together that much money was nearly impossible.

The need for more capital—and the increasing importance of gaming-based tourism to the state of Nevada—greased the skids for changes in the state’s gaming laws that allowed, for the first time, publicly-traded corporations to own and operate casinos. Within a decade, “outside” corporations like Hilton and Lum’s (which renamed itself Caesars World) had bought in, while longtime Nevada gaming operators like Harrah’s and Showboat went public.

The new access to capital allowed for the construction of even more towers on the Strip and forced a fundamental shift in the relationship between a sign and the business it ostensibly signified.

Originally, Las Vegas neon signs were more visually striking—both up close and at a distance—than the buildings they represented. Back when most casinos were two to three stories at most, signs allowed them to stake their claim on passers-by attention.

Take, for example, the Sands. The hotel as it was first constituted at opening was a collection of nearly inconspicuous two-story buildings. Its sign, on the other hand, at 56 feet high was the tallest on the Strip. The gigantic “S” alone was taller from top to bottom than its hotel wings. 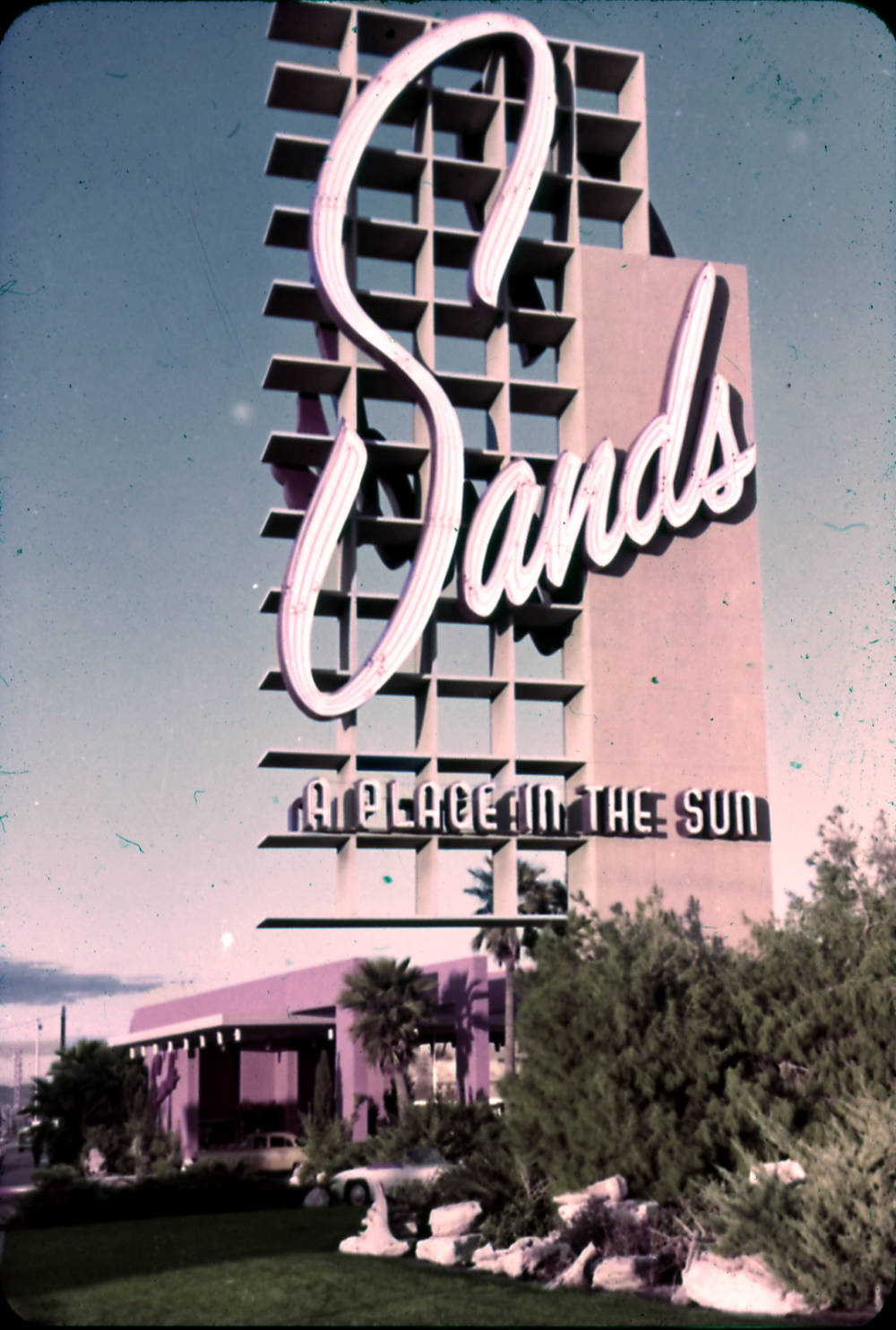 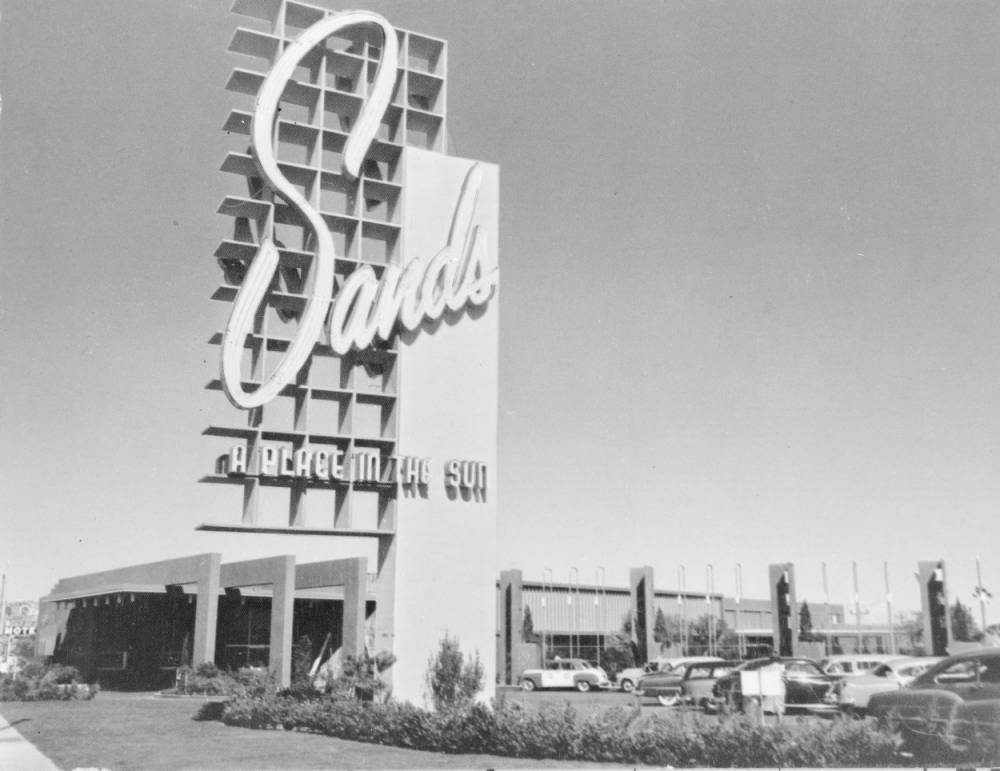 Originally, the Sands sign announced only the existence of the casino, with no additional information. Later in the decade, a readerboard announcing the acts currently playing the Copa Room and Silver Queen Lounge was added. This later grew to two readerboards. They provided information about the current entertainment lineup, but most of the sign was taken up but its neon script and architectural flourishes.

The Las Vegas captured by Robert Venturi, Denise Scott Brown, and Steven Izenour in 1972’s "Learning from Las Vegas" was in the midst of a transition. The Las Vegas they describe was a mix of “decorated sheds,” plain buildings whose ornamentation defined them, to “ducks,” which, like a building shaped like a duck that sold poultry, symbolized itself. As casino architecture became more visually impressive and more distinctive, the sign lost its place as the chief marker of a casino.

In January 1958, an episode of the Lucy-Desi Comedy Hour entitled “Lucy Hunts Uranium” aired on CBS. Set at the Sands, it was filmed mostly on soundstages. The identifying shot that placed the action at the Las Vegas hotel (where Ricky’s band had secured a booking) was simply of its sign—nothing more.

Contrast that with this 1981 pre-concert film of Liberace, which shows him arriving at the Las Vegas Hilton. There is no sign in evidence—merely the massive bulk of the Hilton’s hotel tower. A duck doesn’t need decoration. 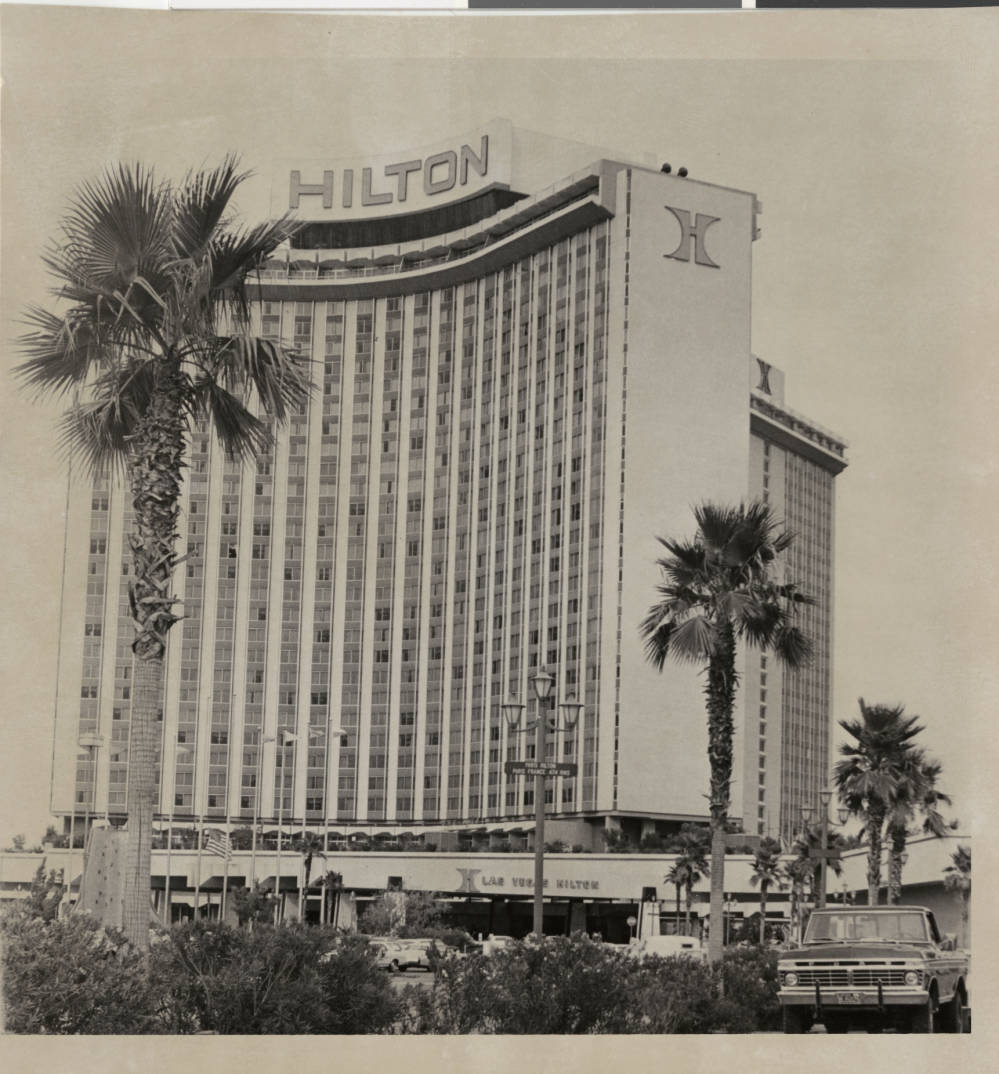 Photograph of the front exterior of the Las Vegas Hilton, circa 1971-1974, UNLV Special Collections

Circus Circus, which opened without a hotel tower in 1968, was the ultimate duck on the Las Vegas Strip. While it had no shortage of Strip-front attractors, including a carousel, a set of fountains, and a sign—it would be easy guess, driving past, that the giant building shaped like a circus tent was in fact the Circus Circus casino. The main tower of Caesars Palace, which had opened a mere two years earlier, gave no exterior clue that it was intended to be a recreation of Ancient Rome; its backlit screen block façade did not immediately suggest anything beyond a modern hotel. It was far from a mere shed, but Caesars Palace did need the decoration of its sign to make its identity clear. Later resorts, even when they weren’t as duck-like as Caesars Palace, didn’t need a sign to announce their identity.

The Hilton is as good an exemplar of any of the early corporate casinos. Opened in 1969 as the International, it was the first second generation casino resort, typified by the presence of a soaring hotel tower housing rooms integrated with a low-slung box filled with the casino, restaurants, entertainment venues, and convention and retail space. The International’s 29-story, Y-shaped tower was so distinct that its signs (there were several) were positively workmanlike, merely listing the hotel’s current set of featured performers rather than trying to evoke a sense of wonder like, say, the Stardust or Dunes signs. The strictly informational nature of casino signage in the early corporate era mirrored perfectly the shift to strictly transactional methods of conducting business. As the spreadsheet asserted its hegemony over the relationships that had traditionally defined casino operations, the shift of casino signage from evocative to informative announced, perhaps unintentionally, just what patrons could expect. 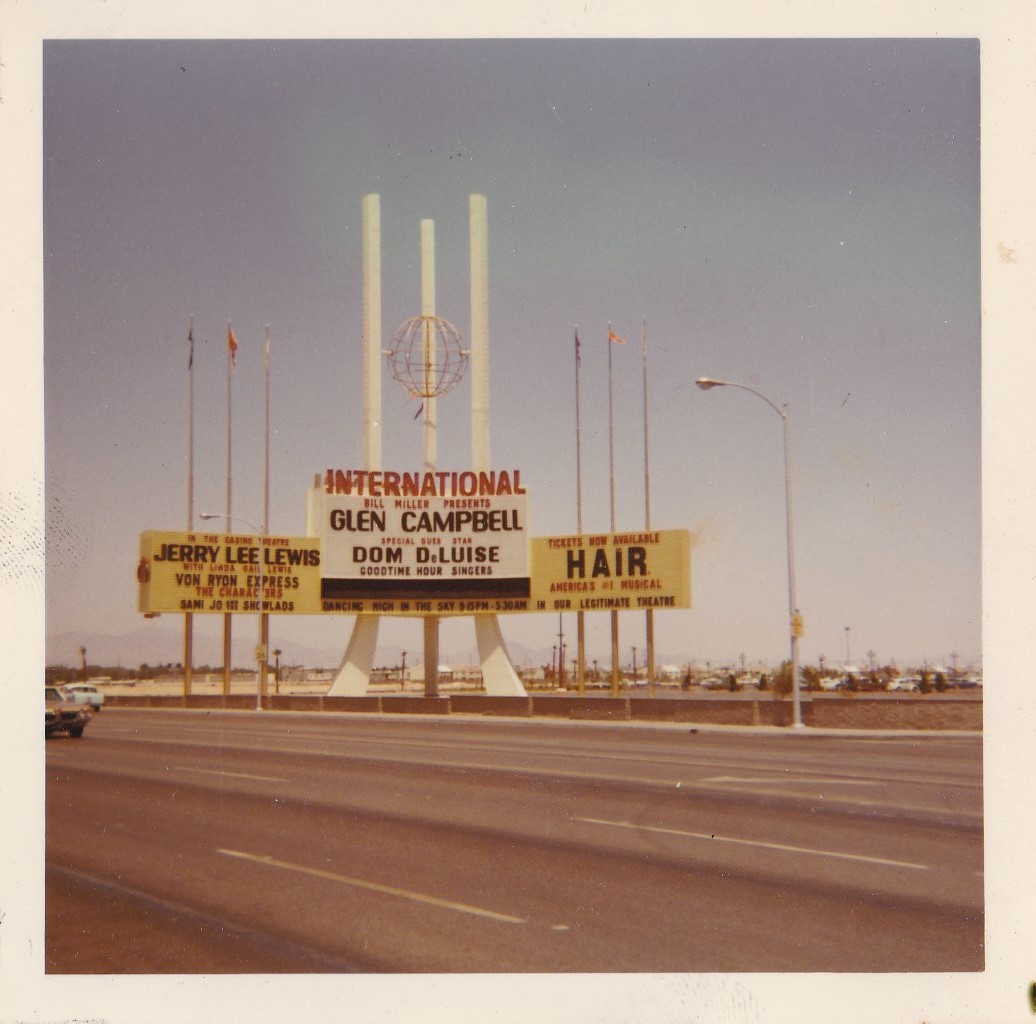 The growing height and distinctiveness of casino hotel towers (one could tell merely from the silhouette whether they were looking at the Hilton, the Landmark, the Sands, or Circus Circus) led to the decline of the sign as signifier, just as a more crowded casino landscape gave an imperative on the need to provide more information outside of casinos. Again, the Sands is instructive. In 1981, a new set of owners gave the property a facelift. One of the most obvious changes is the new sign. Gone was the gigantic “Sands” in script letter. In its place was a sign composed of three rising pylons supporting a massive readerboard, which took up over three-quarters of the signs total surface area. “Sands” has been reduced to a much more compact typeface sitting on top of the readerboard. In the distance, the Sands tower makes the big statement about the resort, while the sign simply tells guests what to look for on the inside. 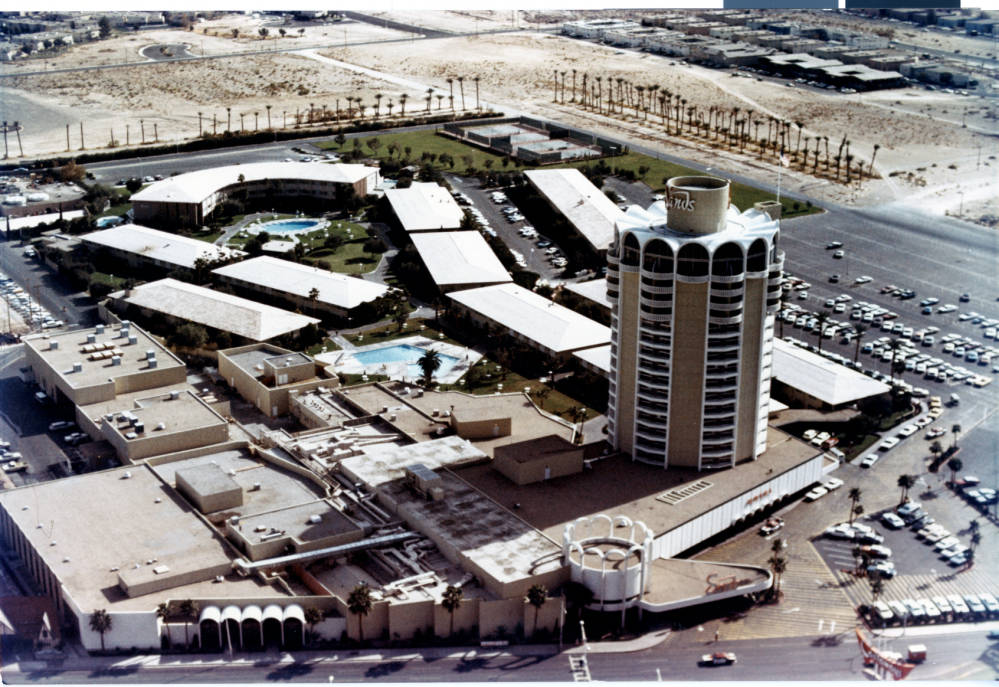 This image of a new Sahara sign shows the increasing importance of the readerboard. 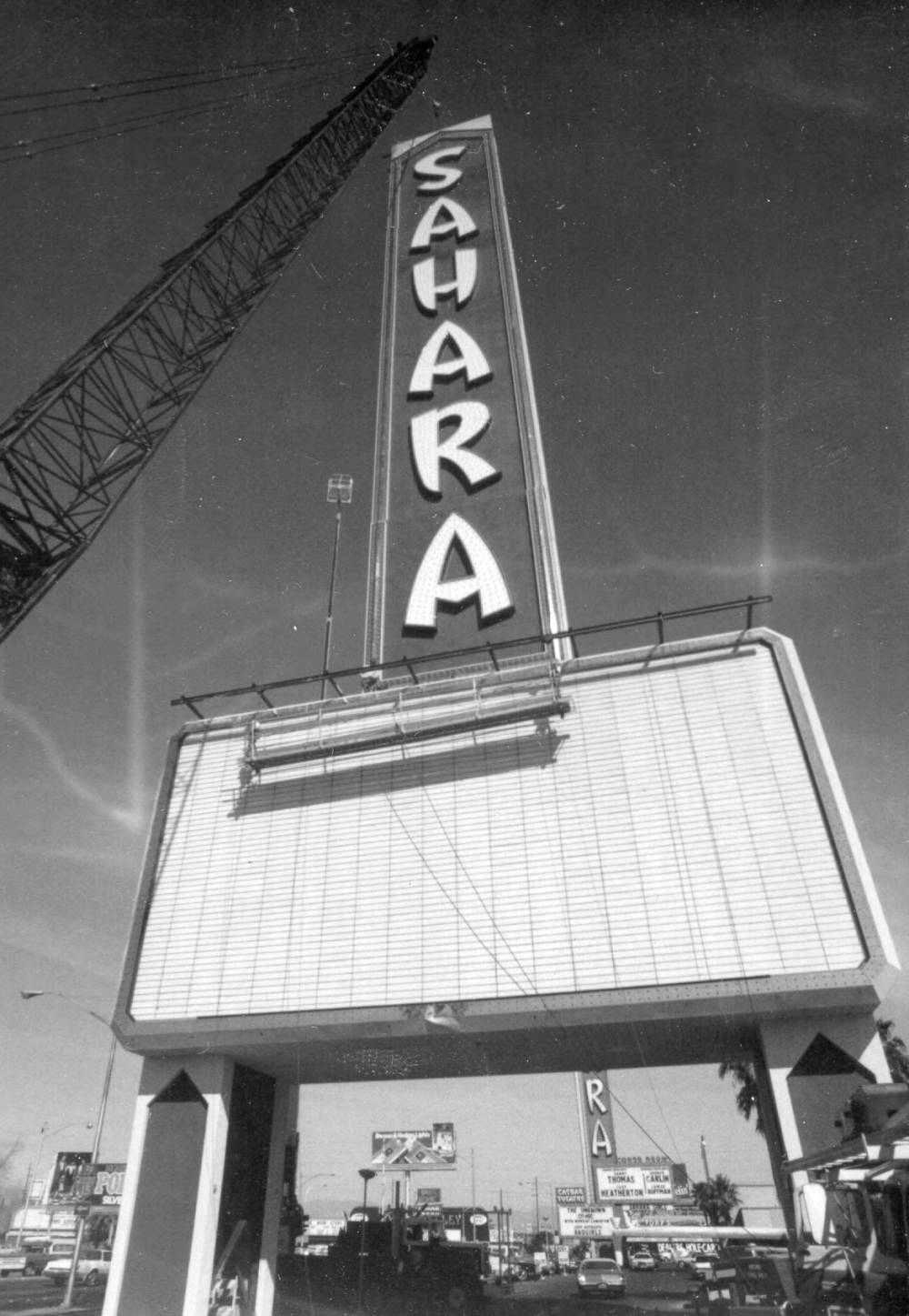 As built and expanded in the 1970s and 1980s, Las Vegas casinos had distinctive though functional towers, sometimes, as in the case of the Sahara and Riviera, cobbled together in successive waves of funding. These casinos worked, and sometimes, particularly when the towers were stitched together with greater foresight, as with the Hilton and original MGM Grand, made efficient use of space.

The difference between the relative importance placed on the El Rancho's readerboard and that of the Stardust sign illuminates the new aesthetic of Las Vegas neon. 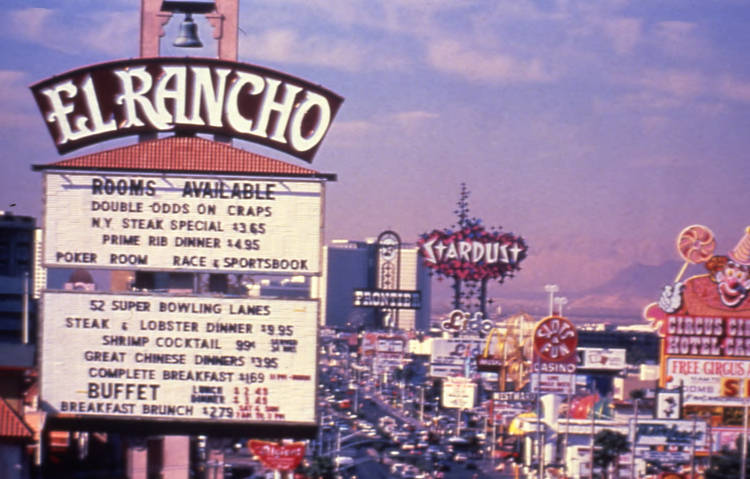 But the opening of The Mirage in 1989 shifted the model for casino design on the Strip. This was fitting because The Mirage was made possible by innovations in how casinos were funded and built. With access to hundreds of millions of dollars made possible by Wall Street brokers, Steve Wynn could build a three thousand room resort in one fell swoop. The third generation of casino resorts, starting with The Mirage, took the layout of the second generation, scaled it up, and added a layer of theming. The third-generation resorts would develop a visual style of their own as advances in sign technology, including LED lighting and video displays, once again changed the function and look of casino signs.

The megaresorts of the 1990s didn’t appear out of nowhere—their construction was possible only because of the funding unlocked because of the success of their predecessors in the early corporate era. That these casinos were eclipsed (and often imploded to make way for) by a later, larger, and more skillfully executed generation shouldn’t obscure their importance to the history of Las Vegas, casino history, or the visual language of signage. The early corporate era, too often passed over for periods on either side of it chronologically, deserves to be appreciated for its own contributions to the development of Las Vegas.

David G. Schwartz, a gaming historian, professor, and instructor at the University of Nevada, Las Vegas, studies gambling and casinos, video games, Las Vegas, tourism, and history. He has written several books and teaches in the Department of History, Boyd School of Law, and Honors College. His academic interest in gambling stems from his hands-on experience in the casino industry as a security officer, surveillance officer, and Mr. Peanut.

The Scholar in Residence program is currently invitation only. Lecturers work with the Education & Outreach department to delve into the Neon Museum collection and develop presentations that have clear connections to the Museum’s mission and Las Vegas history. This project is funded in part by a grant from the Nevada Arts Council, a state agency, and the National Endowment for the Arts, a federal agency.