Days of Luxor Past: The Neon Museum’s Most Enigmatic Sign

Learn more about a mysterious Luxor sign in The Neon Museum collection. 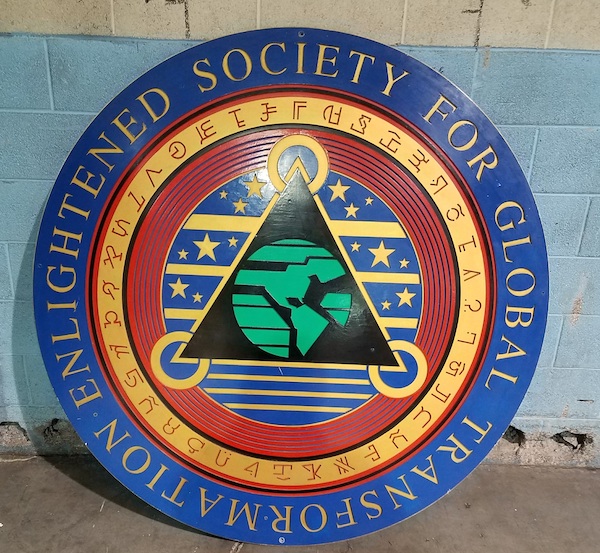 If the pyramid wasn’t a dead giveaway, one might be hard-pressed to guess which Strip property this interior sign came from. The “Enlightened Society for Global Transformation” isn’t exactly a typical name seen on historic signs now at The Neon Museum, but it does harken back to a time not too far in the past in which the Strip partially -- and temporarily-- underwent a bit of a “transformation” into a Disney-esque kid-friendly environment. 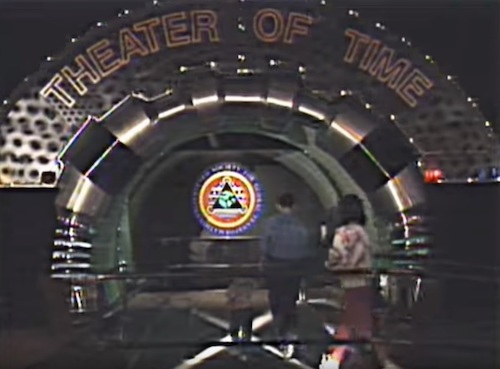 The year 1993 saw the opening of three major new hotels on the Strip—all of which boasted their own family-oriented attractions. Treasure Island memorably featured a live-action pirate battle right outside, MGM Grand’s Wizard of Oz theme and Grand Adventures theme park enchanted at least some youngsters, and the Luxor may have had the most ambitious and strangest attractions of the trio. 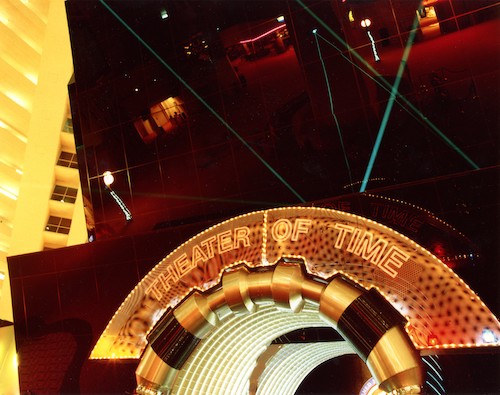 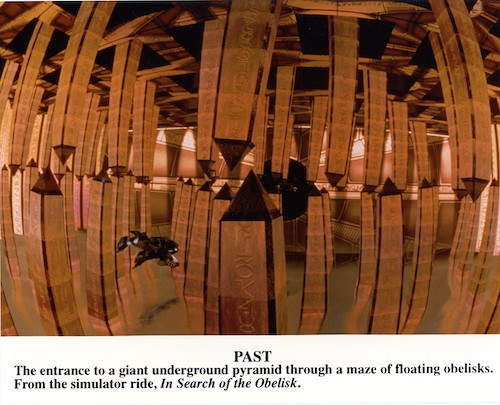 Hollywood special effects veteran Douglas Trumbull  (known for 2001: A Space Odyssey, Close Encounters of the Third Kind and Blade Runner) was brought on board by Circus Circus Enterprises to develop Secrets of the Luxor Pyramid. Dubbed a “trilogy of cutting edge special effects attractions” by the narrator of an early 1990s promotional video, these included In Search of the Obelisk, Luxor Live, and Theater of Time. Taken together, the films using 3D and motion simulators formed a narrative in three parts, each experienced inside their own unique theaters. The Enlightened Society for Global Transformation sign is from the third part of the trilogy, Theater of Time. 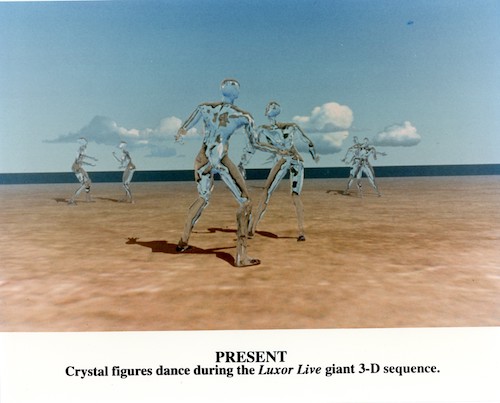 The films helped the Luxor go beyond mere appropriation of ancient Egyptian imagery and presented a fictionalized account of the Luxor hotel site, depicting the past, present and future. As scholar Brian Lonsway has observed, the “building thus presents itself not as a signifier of Egyptian style, as it would outwardly appear, but a monument to an actual (if actually fictional) local Egyptian heritage. In this way, the building’s theme invents its own history not by referring to a specific dislocated historical referent, but by playfully proclaiming a fictive history of its own geography.” 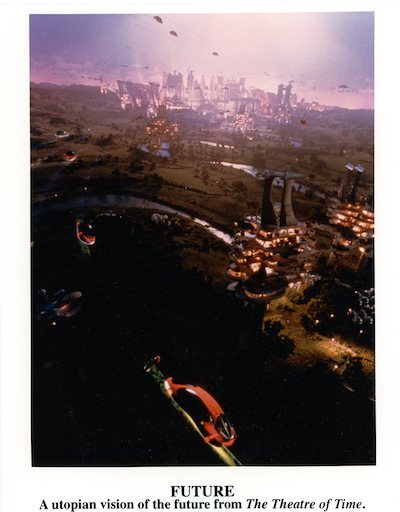 The three fifteen-minute films told this fictional history of an archaeological discovery that took place underneath the casino/hotel as it was being built. Part one, In Search of the Obelisk, transported guests into a hovercraft chase through an underground pyramid starring the Indiana Jones-esque protagonist and fictitious builder of the Luxor, Mac MacPherson, and his struggle against the villainous Dr. Osiris. An intrepid Luxor visitor shot video of this first episode and shared with the world via YouTube. 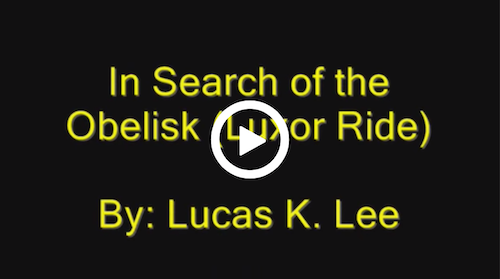 In the second part, Luxor Live, visitors are part of a studio audience as a fake TV talk show is being filmed featuring characters from part one and a “fabulous 3D solar eclipse.” Here it is revealed that Dr. Osiris, leader of the Enlightened Society for Global Transformation, has absconded with the crystal obelisk imbued with mystical time-warping powers. 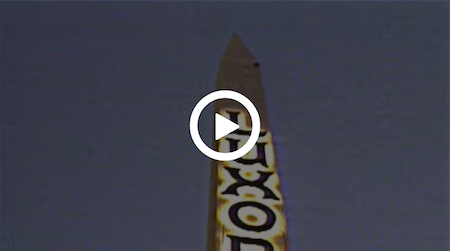 The round shield sign featuring the pyramid adorned the entrance to the final episode, Theater of Time. The malevolent Dr. Osiris, using the obelisk’s powers, rules over an evil empire in a dystopian future. The hero MacPherson eventually gets the obelisk back after some time traveling. Along the way, he experiences a vision of a futuristic utopia and prevents Dr. Osiris’ bleak timeline from becoming a reality, and thus the day is saved and all is well at the Luxor.

Brief footage of the Theater of Time’s look into the future later appeared on the Odyssey Into the Mind’s Eye CGI video compilation. 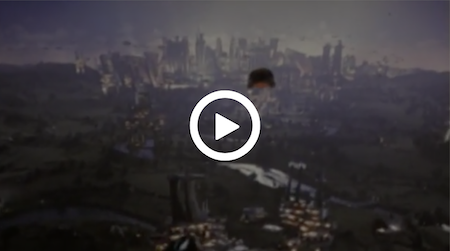 The sign also features hieroglyphic characters vaguely resembling runes that were also used in other areas of the property.

According to artist Michael Wardle, who created some of the Luxor’s murals and sculpted the face of the Sphinx, this was the brainchild of Luxor architect Veldon Simpson. During a 2016 panel discussion at The Neon Museum, Wardle recalled that Simpson allegedly “asked Doug [Trumbull] to have his guys make him an alphabet that looked like hieroglyphs but were actually representative of our alphabet and our ten digits of numerals; then had those used on the obelisk out front and the obelisk inside that showed all his contact information. So when the aliens came and saw the light and they showed up there, with their advanced minds they’d look at the obelisk, get his contact information, and go knock on his door.”

While a compelling anecdote, it isn’t clear if it’s true or if it worked. We have also yet to decipher the meaning of the message (if any) on the Theater of Time sign. 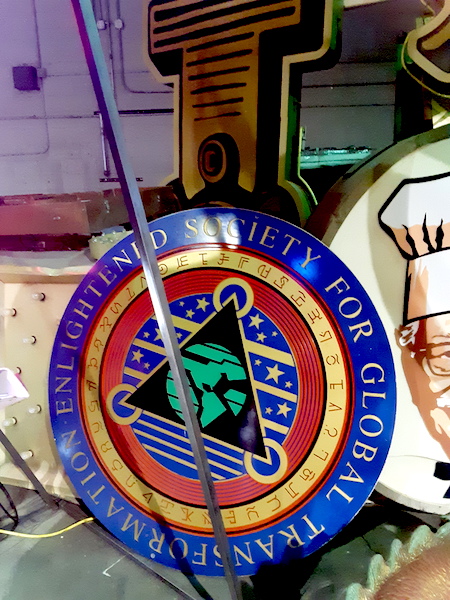 Today the Luxor’s light beam is still visible for miles around the Las Vegas valley, but the unusual film trilogy, Nile ride and King Tut’s tomb are no longer part of the property. The Theater of Time sign still reminds us of the Luxor’s attempt to market to family audiences, which arguably pushed the boundaries of family-friendly Las Vegas further than anyone else.

Do you have any fond memories of the Luxor or 1990s Las Vegas in general? Have any ideas as to what the “hieroglyphic” characters on the sign are actually spelling out? We invite you to share with us on Facebook or Twitter!