Many are from the sign company Sign Systems Inc. (SSI) which was absorbed into Federal Sign in 1988. Federal Sign joined with Heath & Company and became Federal Heath in 2003. Most date from the 1980s to the early 2000s. They show architectural and sign designs from numerous Las Vegas properties including the Stardust, Barbary Coast, Frontier, and many more.

A selection of these drawings were previously on display as part of The Neon Museum’s “Designs Decoded: Technical Drawings from Federal Heath” exhibit. The exhibition was on view in 2016 at the Iron Yard coding school and was originally curated by Cynthia Behr Warso, Derek Weis, and Maggie Zakri.

For those who missed the exhibit and for everyone who is staying at home right now in these trying times, we’ve decided to make it available online.

This exhibit features technical drawings from the archives of the Federal Heath sign company that until now have never been seen by the public. The drawings are an important part of The Neon Museum's growing initiative to catalog and digitize the Federal Heath collection. They are shown alongside images of the signs selected from a variety of photograph collections housed at The Neon Museum.

Before CAD/CAM, there were tools of the trade sign designers used to take their creative ideas from concepts to buildable plans that could be shared with clients, owners, and investors: the mechanical pencil, engineering and architectural scales, the T square, paper and the drawing board.  Many iterations later, on drawing after drawing, compiled into heavy rolls of blueprints, some designs eventually won out and were built while other concepts fell into obscurity. The technical drawings in this exhibit (1982-1997) are as visually compelling as any Renaissance artist’s sketchbook with exuberant, ambitious designs offset by notations indicating technical specifications, measurements, scale and proportion, revealing an elegant balance between art and technology.

This exhibit shows how design complexity was rendered into striking and often abstract or symbolic displays deployed for advertising, combining logos, typography, shape and color to create a visual code that attracts, expresses theme, and conveys complex messages. The resulting structures of light would come to define Las Vegas worldwide.

Kermit Wayne designed the original “decorated shed” signage that wrapped the Stardust in atomic-era glory in 1958. Paul Miller of Ad-Art later added the iconic and much-loved roadside pylon sign in 1968. During later remodeling efforts different designs were presented to the hotel owners, including this pylon sign that was never built. 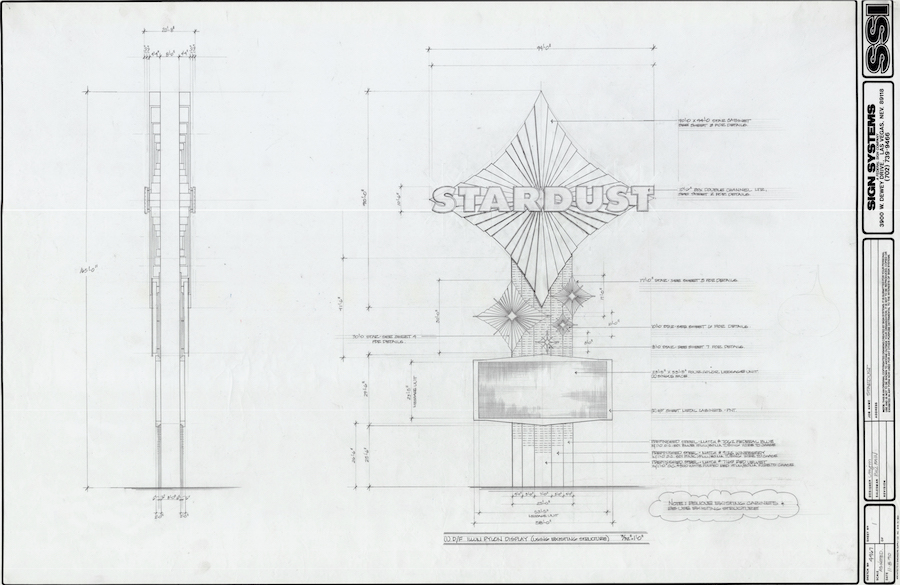 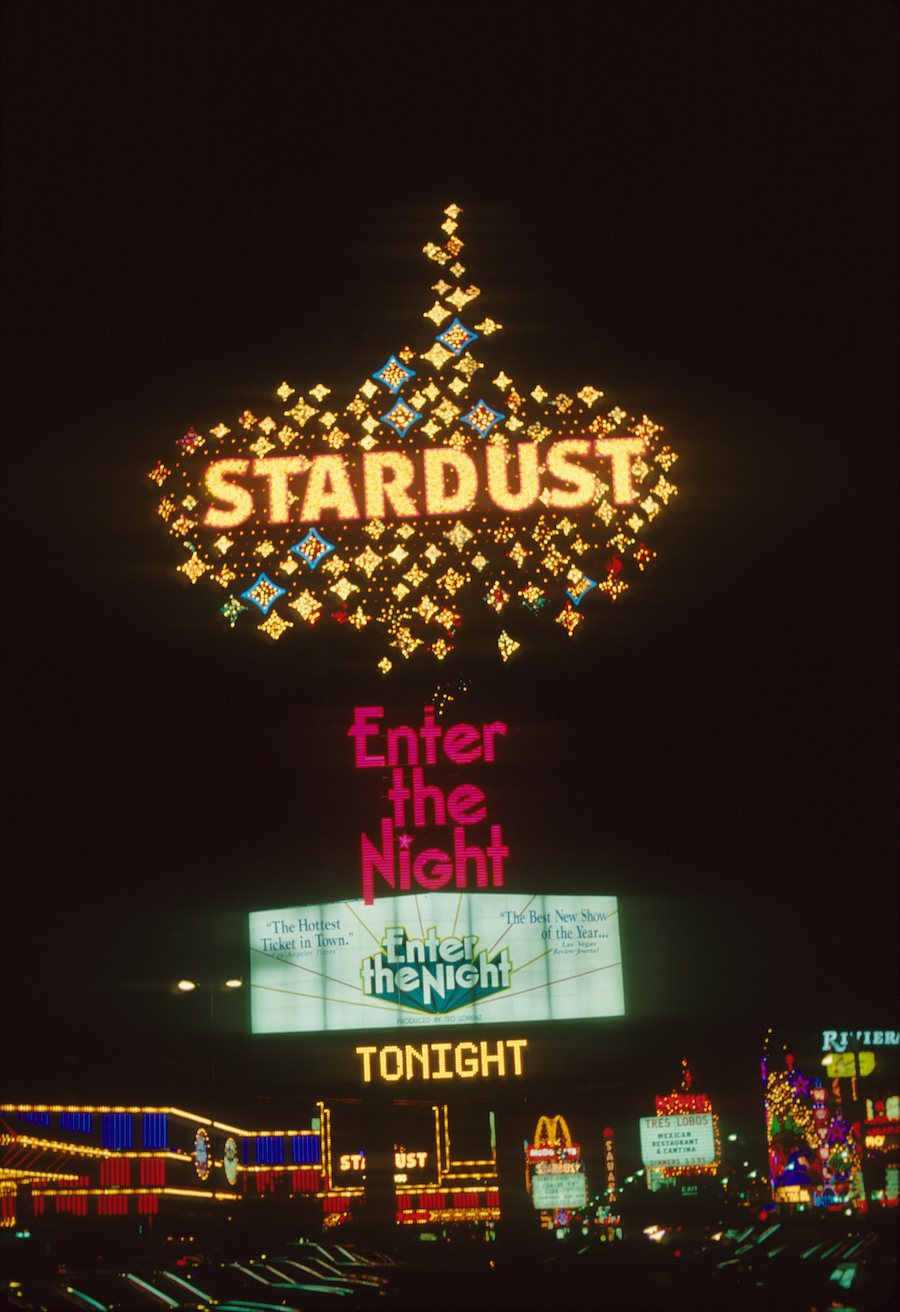 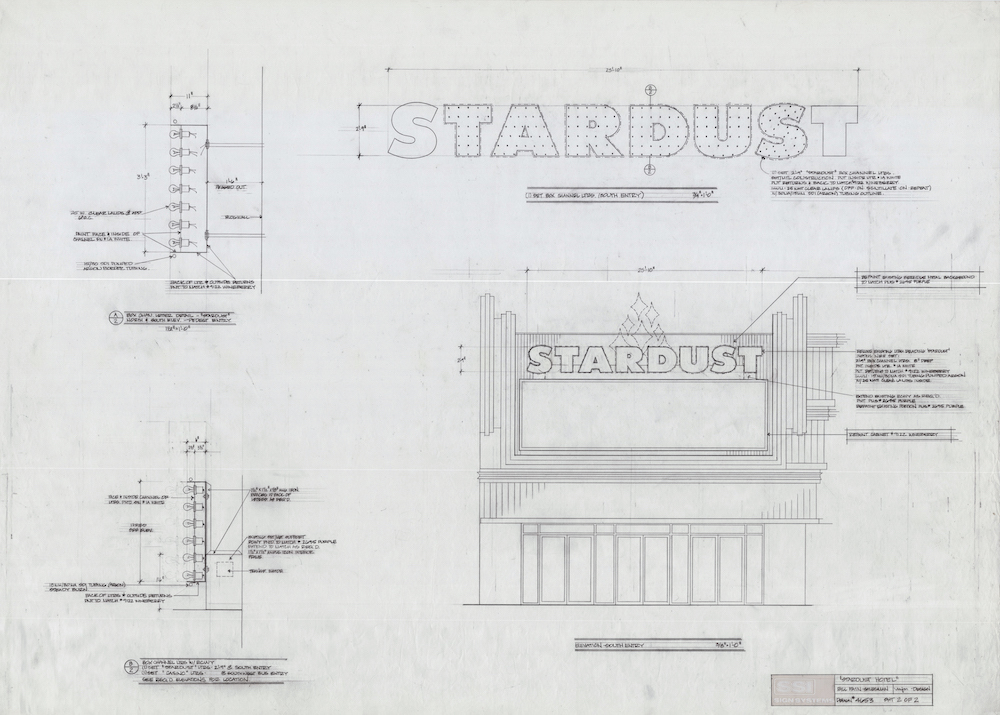 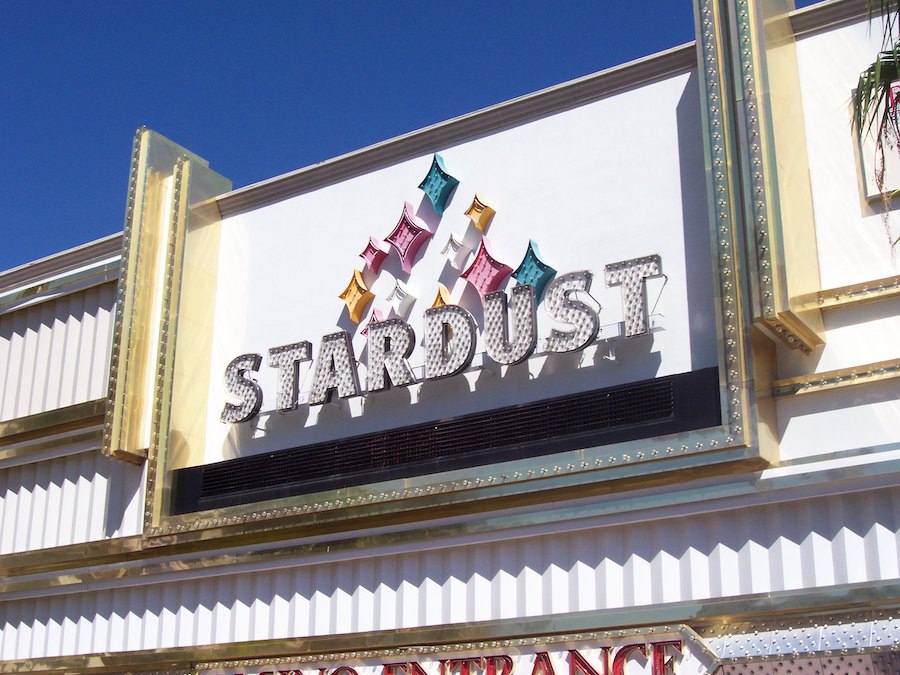 The Futura font seen in these drawings and photographs replaced the Stardust’s jagged Atomic lettering style in the early 1990s. Both font styles, as well as the Stardust pylon sign, are now in The Neon Museum collection.

The iconic signage originally designed by Brian “Buzz” Leming during his time at YESCO featured Tiffany-style glass, a burgundy and gold color scheme, and 19th century-style lettering that is now known as “Barbary Coast Block.” 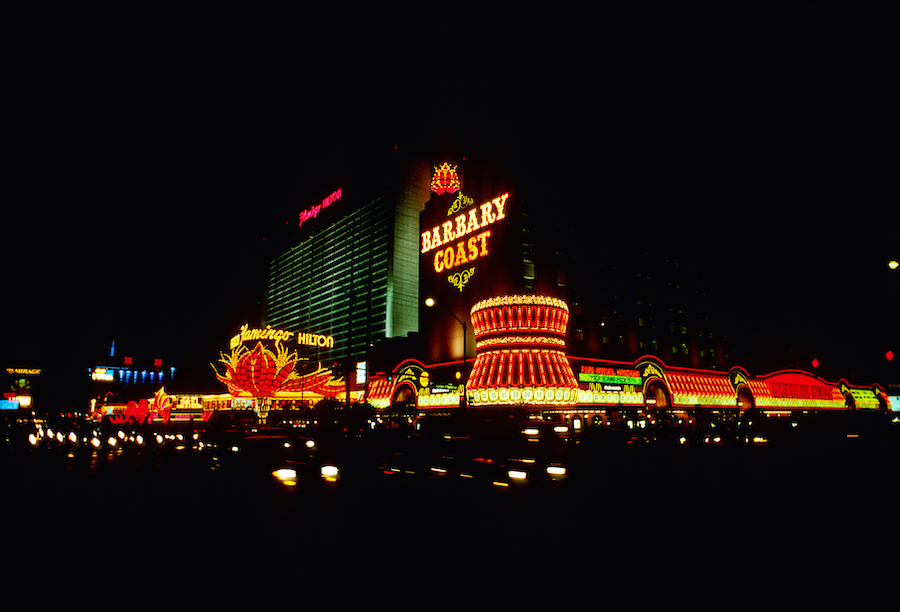 Many of the design elements seen here were retained when the property became Bill’s Gamblin’ Hall & Saloon in 2007. Today it is the site of The Cromwell Las Vegas.

Ad-Art designer Bill Clarke led the effort to transform the Las Vegas Strip in the 1960s, altering the skyline with the distinct Thunderbird signage and the Frontier super-pylon, the tallest sign in the world in 1967. While at Sign Systems (SSI), Buzz Leming later continued the Western longhorn tradition with the updated 1980s façade and pylon. 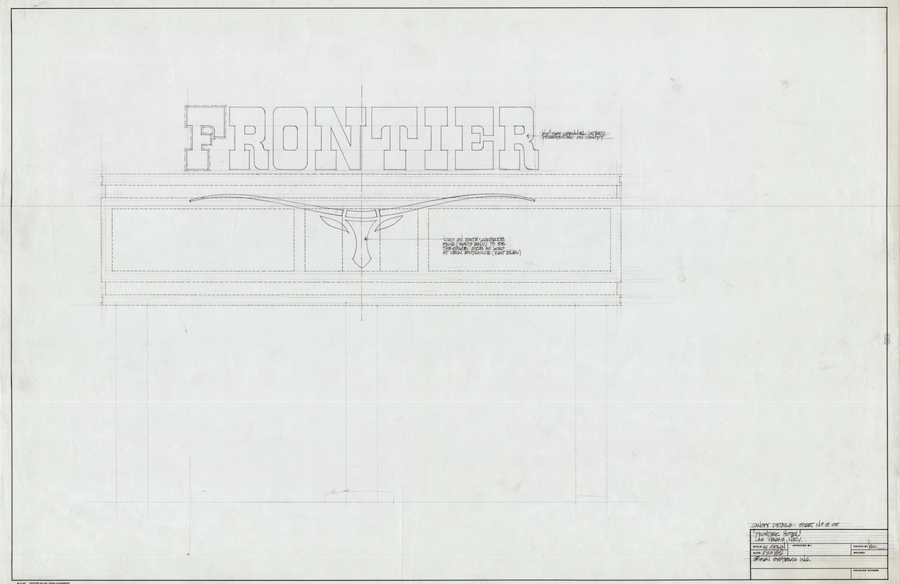 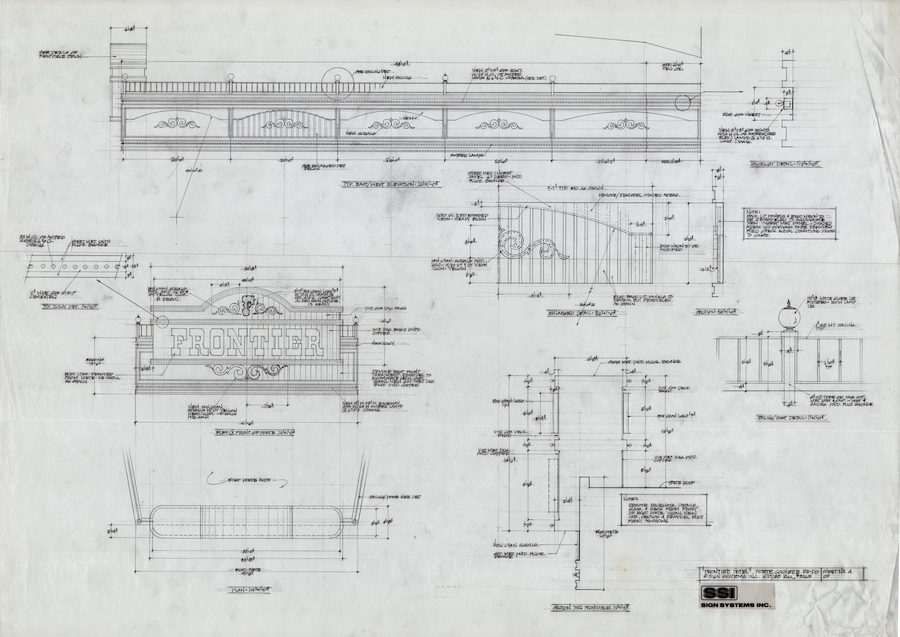 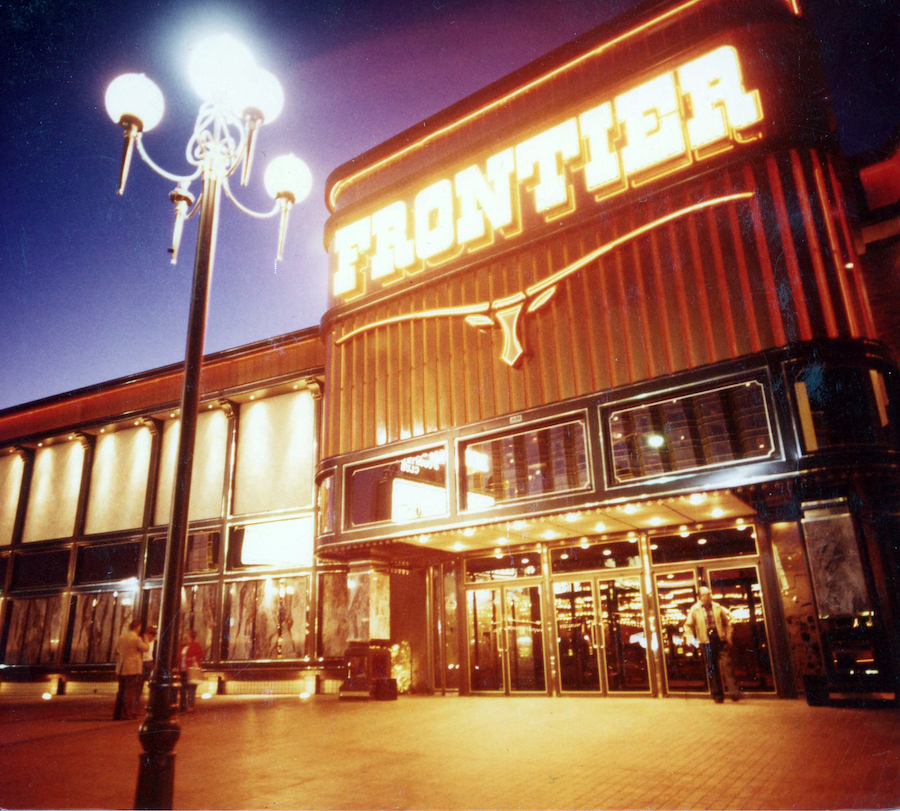 O’Sheas opened on the Strip next to the Flamingo as a unique party destination looking to attract a young crowd with its beer pong area and low-minimum gaming tables. Buzz Leming created the festive, Irish-themed signage to reflect the casino’s atmosphere. 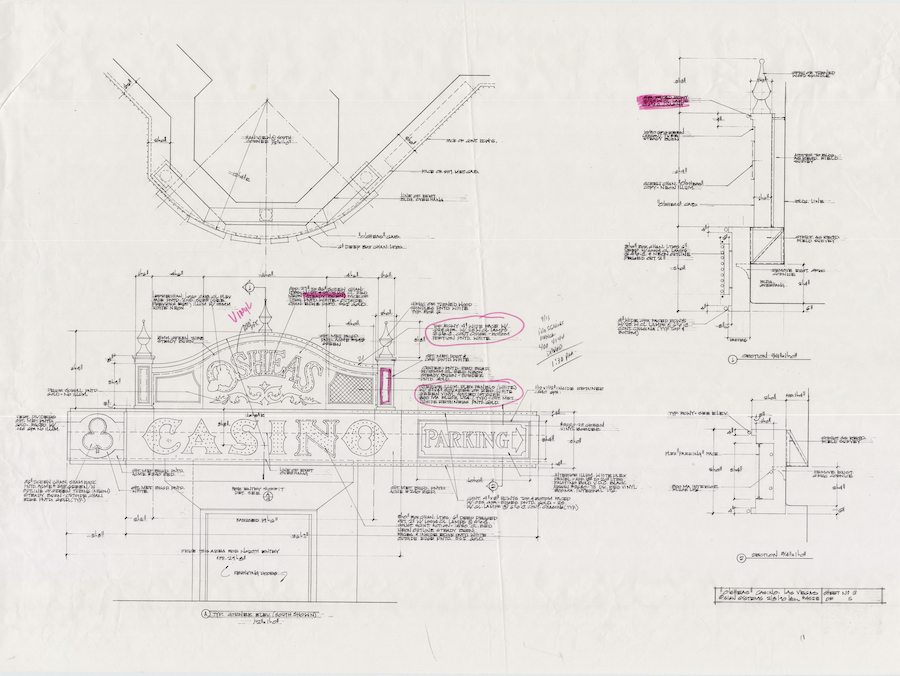 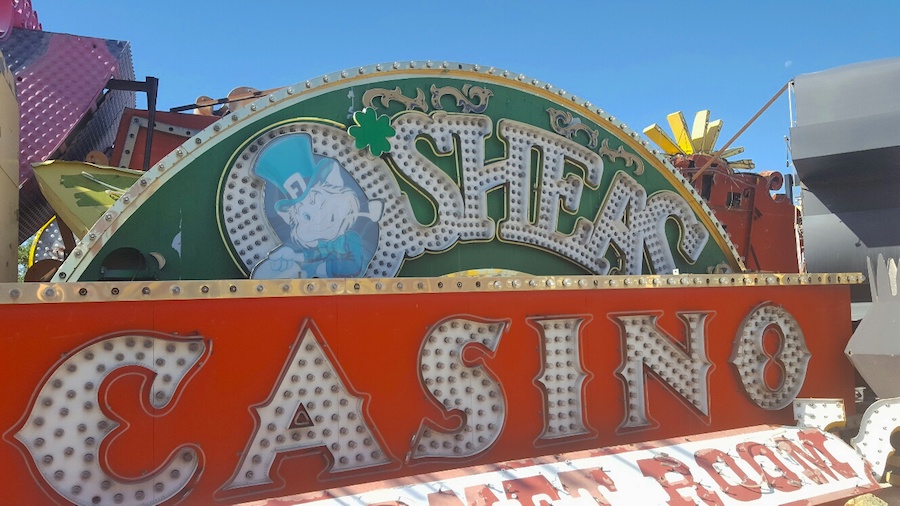 Raul Rodriguez created the stunning plume of feathers design for the Flamingo Hilton in 1976. This drawing by designer Brian “Buzz” Leming shows modifications to Rodriguez’s design. 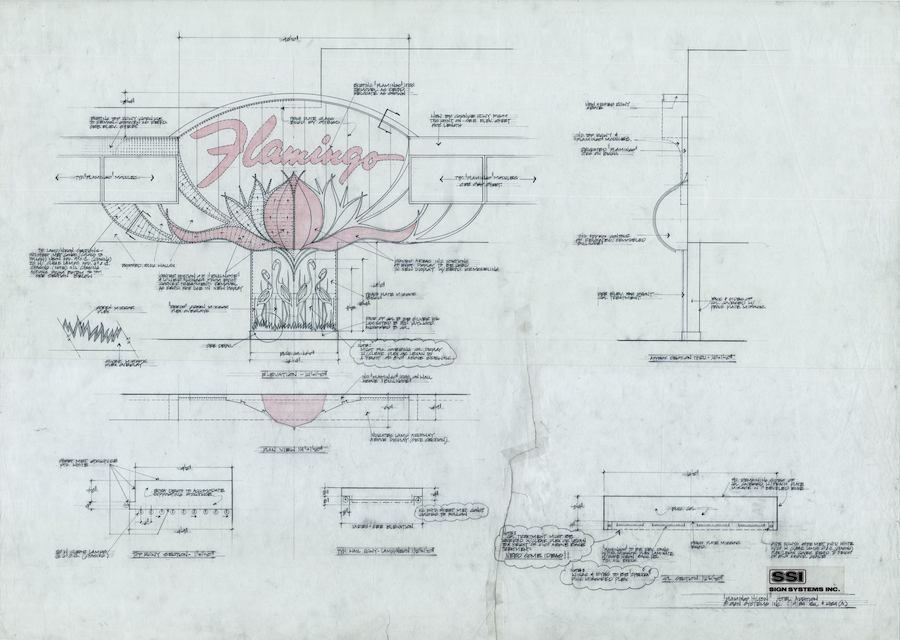 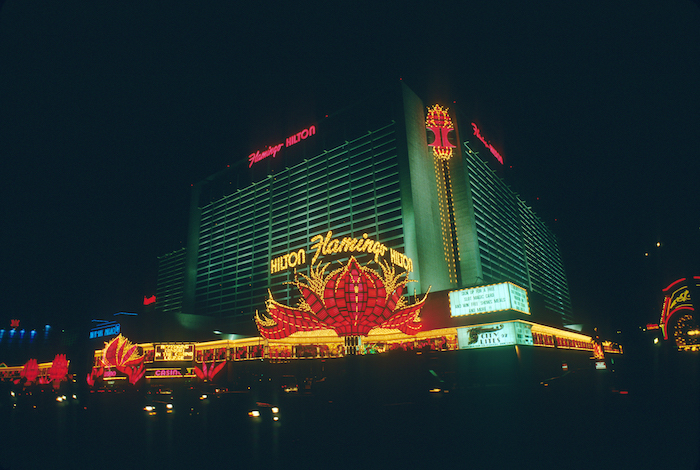