The Neon Museum Las Vegas | The history of Las Vegas through neon - How Many of the Signs Light Up?

How Many of the Signs Light Up?

Visitors often want to know how many of the historic signs at The Neon Museum light up.

There are currently nineteen working signs in the Neon Boneyard. Seventeen are restored while two others, the Riviera and Fitzgeralds, were received in working condition. The Neon Museum partners with sign companies both to move and arrange the signs and to restore them. Full restorations are expensive and complicated. Restoring a sign can cost anywhere from several thousand dollars to hundreds of thousands of dollars (as in the case of the 82-foot Hard Rock guitar). 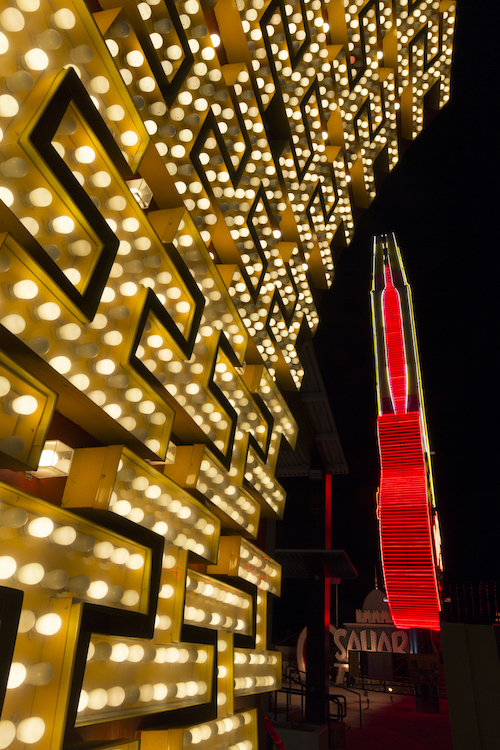 This c. 1961 sign is just one segment of a large wall of H’s that adorned Binion’s Horseshoe on Fremont Street (today known as Binion’s). 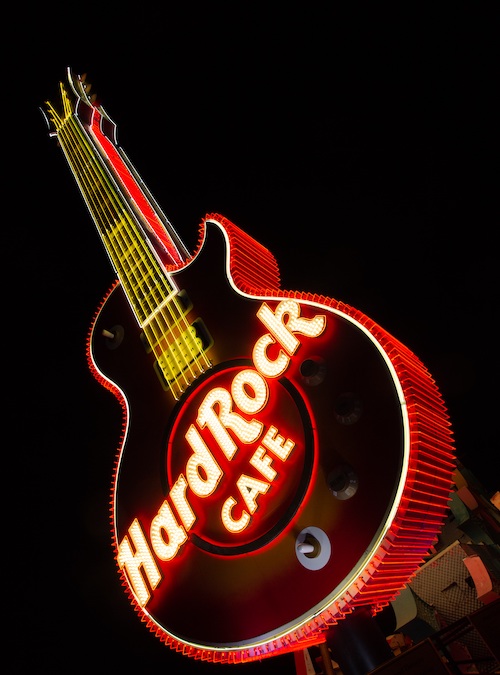 The Hard Rock Café guitar is the largest restored sign at The Neon Museum. Donors from around the world have contributed toward the $350,000 goal to cover the cost of the restoration and installation and to establish a fund for regular maintenance. 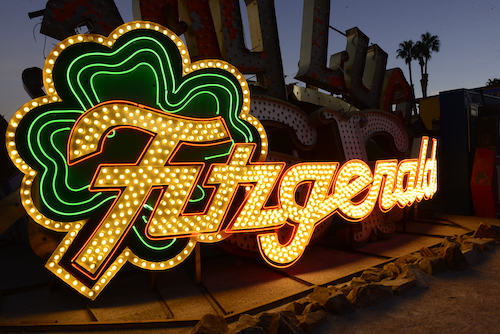 One of two signs in the Neon Boneyard that the Museum received in full working order, Fitzgeralds operated on Fremont Street from 1987 to 2012. 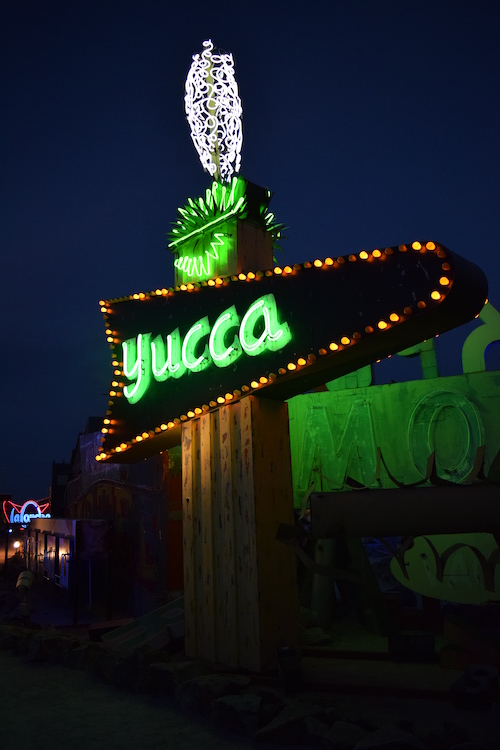 Originally located on Las Vegas Boulevard north of the Stratosphere (now the Strat), the c. 1950s Yucca Motel sign was partially restored in 2017. 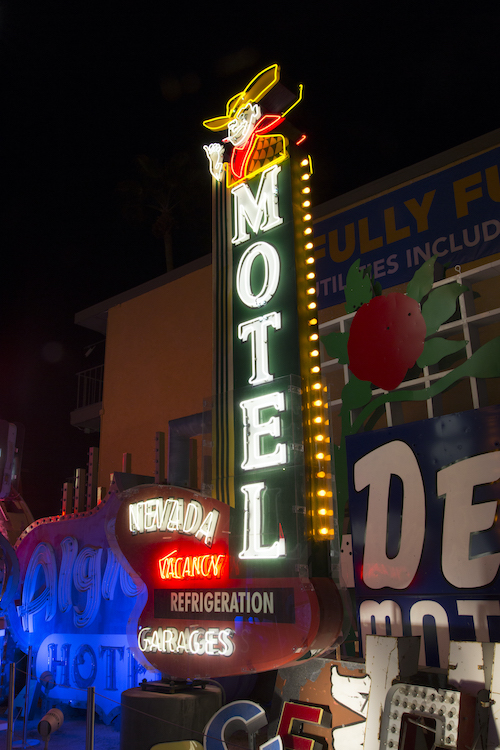 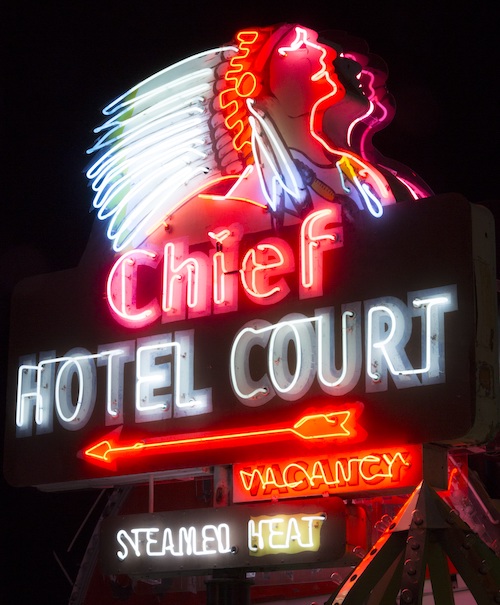 This is the oldest functional sign on display at The Neon Museum, dating to about 1940. The sign depicts a stereotypical Native American image that bears no resemblance to the local Paiutes. 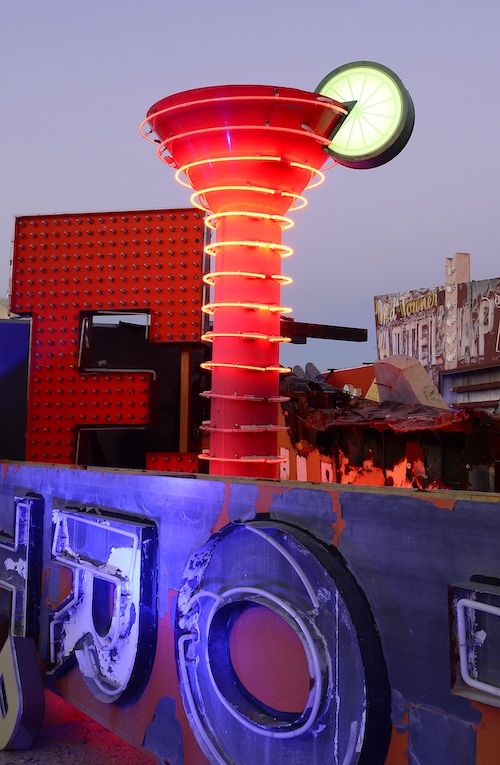 From a short-lived restaurant and bar located near the Wynn, this is one of the youngest signs at The Neon Museum from about 2007. The eye-catching sign represents a common Las Vegas sight, the souvenir yard glass. 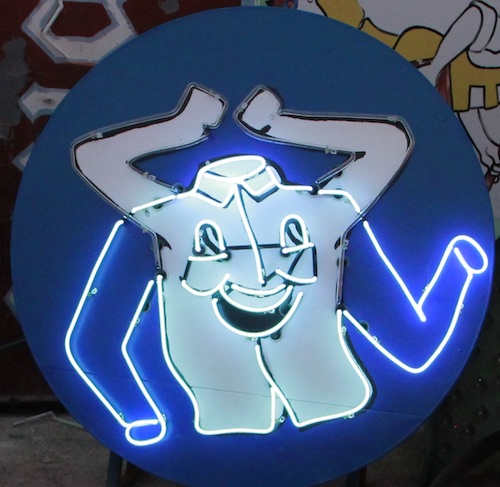 The “Happy Shirt” is a favorite of many and is a great example of a simple animated neon sign. 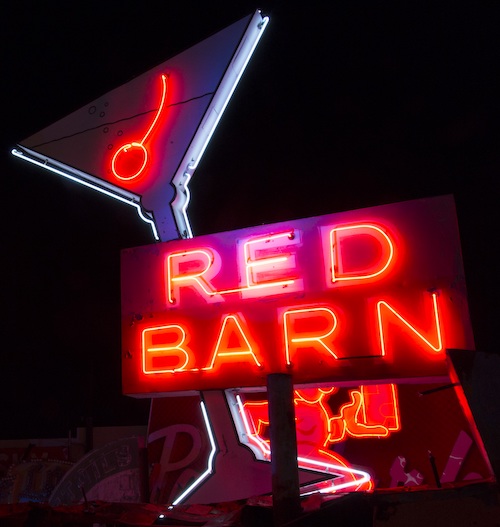 The name of the business referenced the building in which it resided (a red barn). The Red Barn was among the first openly gay bars in Las Vegas in the 1970s and was located right down the street from the Steiner Cleaners “Happy Shirt” sign on Tropicana Avenue. 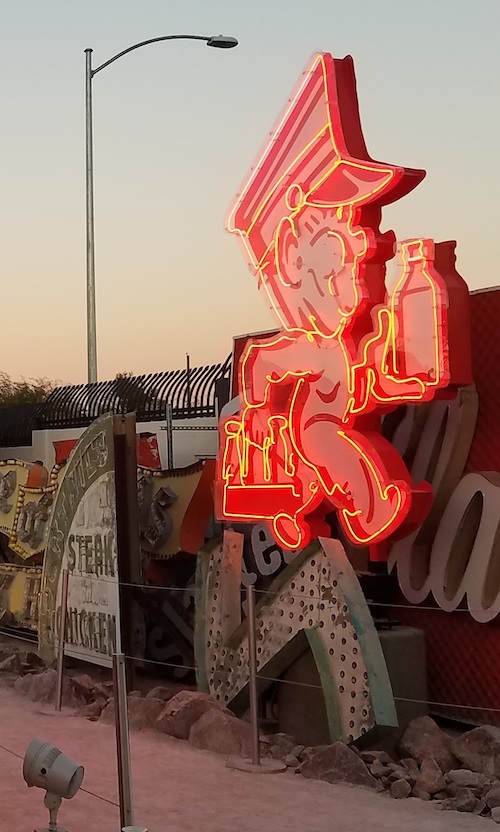 “Andy” Anderson was part of the signage erected at Anderson Dairy in the 1950s. 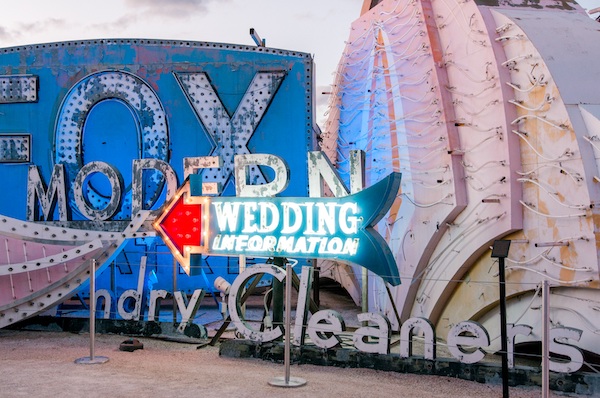 The Wedding Information sign was in use in the 1970s at the Ali Baba Wedding Center on the south end of the Las Vegas Strip near the airport.

This 1960s sign is from Jerry’s Nugget, a fixture in North Las Vegas. 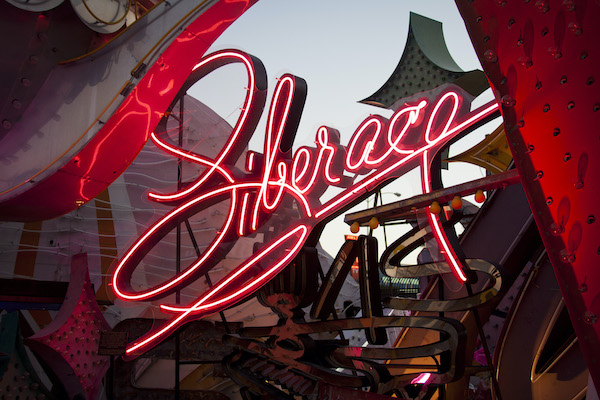 The restoration of the Liberace Museum and Jerry’s Nugget signs was the subject of a 2014 Vegas PBS documentary titled “Restoration Neon.” 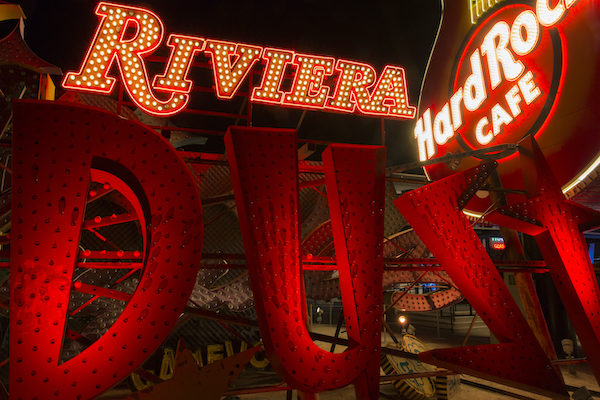 This sign was donated to the Museum in working condition after the hotel closed in 2015. 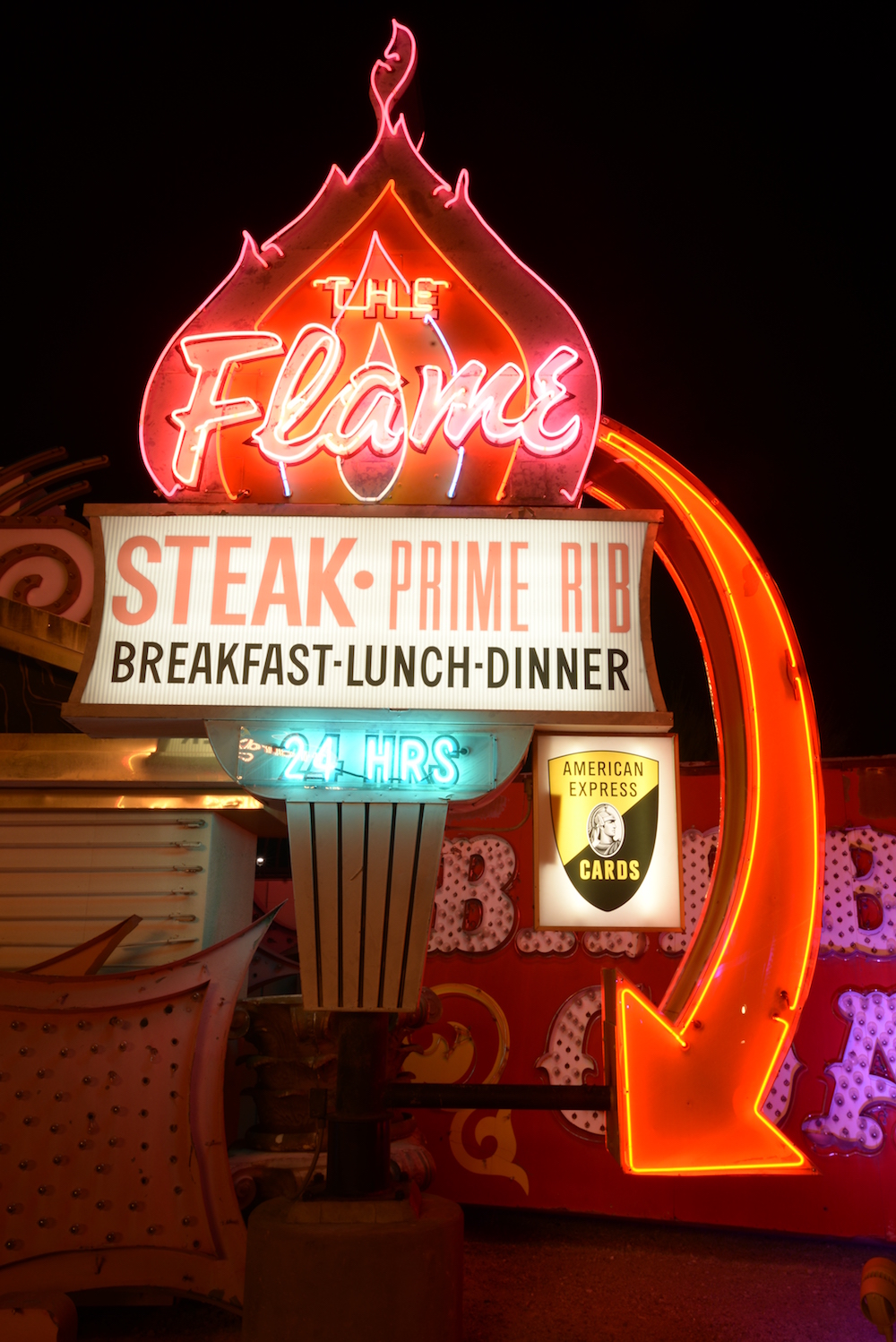 One of two signs from The Flame restaurant that are now at The Neon Museum, this restored piece was put back on display after being in storage for several years. 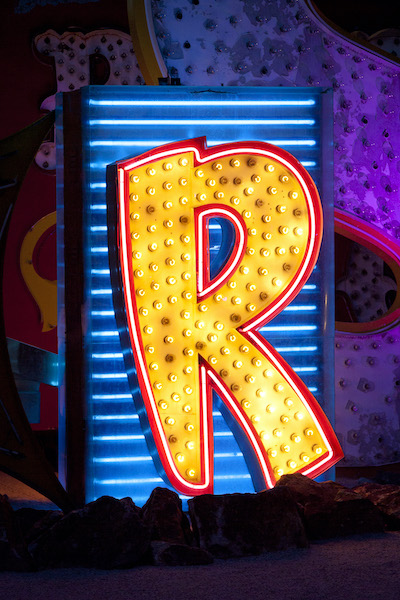 The restored Sahara R (and A on the opposite side) was one of the Museum’s more modest restoration efforts. 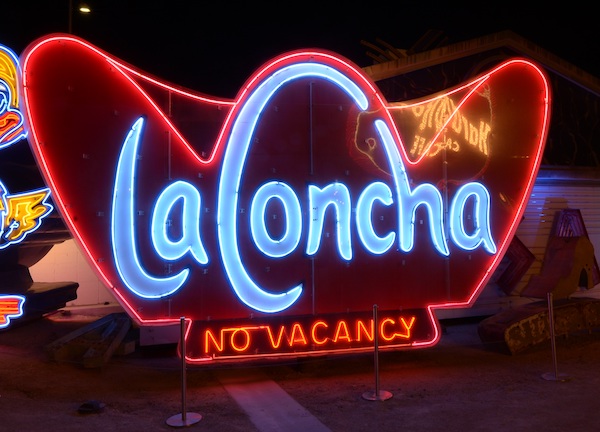 The base of the original La Concha Motel sign from the 1960s was restored prior to the 2012 grand opening of The Neon Museum’s current facility. The shell shape mimics the design of the lobby building designed by African-American architect Paul Revere Williams, which is now the Museum’s Visitors' Center. 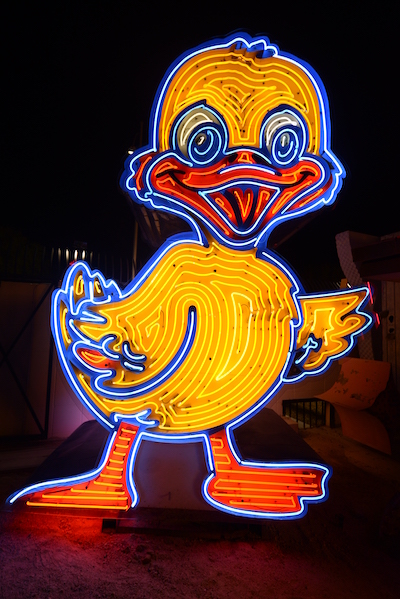 It’s not from a famous hotel or casino or even a long-running local business, but nearly everyone loves the giant neon duck from Ugly Duckling Car Sales, c. 1997. The recently restored sign greets visitors by peaking over the fence of the Neon Boneyard. 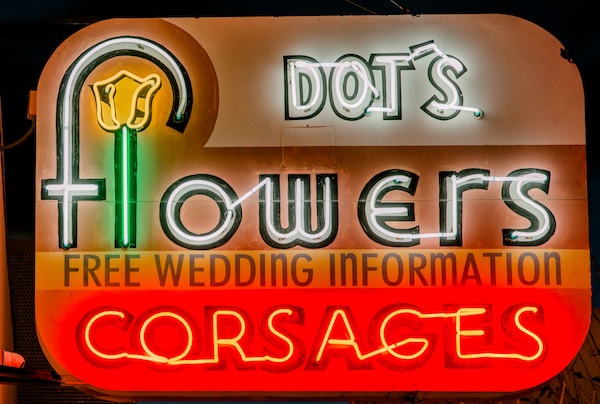 Dot’s was one of many neon signs that once dotted Las Vegas Boulevard. The sign dates to the late 1940s and is now on display right outside the Museum Store.

The Neon Museum has also partnered with the City of Las Vegas and the Regional Transportation Commission (RTC) to reintroduce neon to the Las Vegas landscape. The Las Vegas Signs Project currently comprises nine restored signs that have been installed throughout the city as public art. Click here for a self-guided tour map. Please note that the Landmark sign has been temporarily placed in storage due to nearby construction work.

Want to know more about The Neon Museum’s recent restoration projects? Check out the videos below: