The Neon Museum Las Vegas | The history of Las Vegas through neon - Karl Orozco, Impressions of an Artist Residency, Part 2

After each week of his residency at the Neon Museum’s Ne10 Studio, artist Karl Orozco sat down with Arts Programs Coordinator Jo Russ to reflect on developments.

“First off, the public event was a big success. It was definitely the best-run out of any of these Play & Print workshops. It was just very, very smooth. The volunteers were awesome. In particular, I want to give a big shout out to Ashley, who I think is a high school student senior. She was so good at relaying the rules! Alison was also great at running the printing table which was active for most of the afternoon.

I had some interesting conversations with people. Las Vegas-based artist Brent Holmes was really interested in the symbolism of the tiles and was asking a lot of questions about why the suits were chosen this way, why the colors were as such, etc. In that conversation, I told him that Mahjong playing is really fun and I want people to have a good time and memorialize their experience here. The conversation Brent and I were having about symbolism and the history of the Philippines, the culture of Manila, this is what I think this project is primarily about. It’s the road I want people to take and that has happened very naturally. After the second or third game when people became comfortable with the rules, they started to actually look at the tiles and think about what these symbols are and why.

It was definitely a younger crowd in their twenties and thirties, which is a demographic that this game hasn’t reached. I’m including myself in that because my family wouldn’t let me play when I was younger and the fact that this is a story that has been echoed by a lot of people. There were a lot of conversations about the game and about gambling, the idea of replacing money with art, and about the symbolism and history in the Philippines. So this was definitely the most enriching experience I’ve had with this project.” 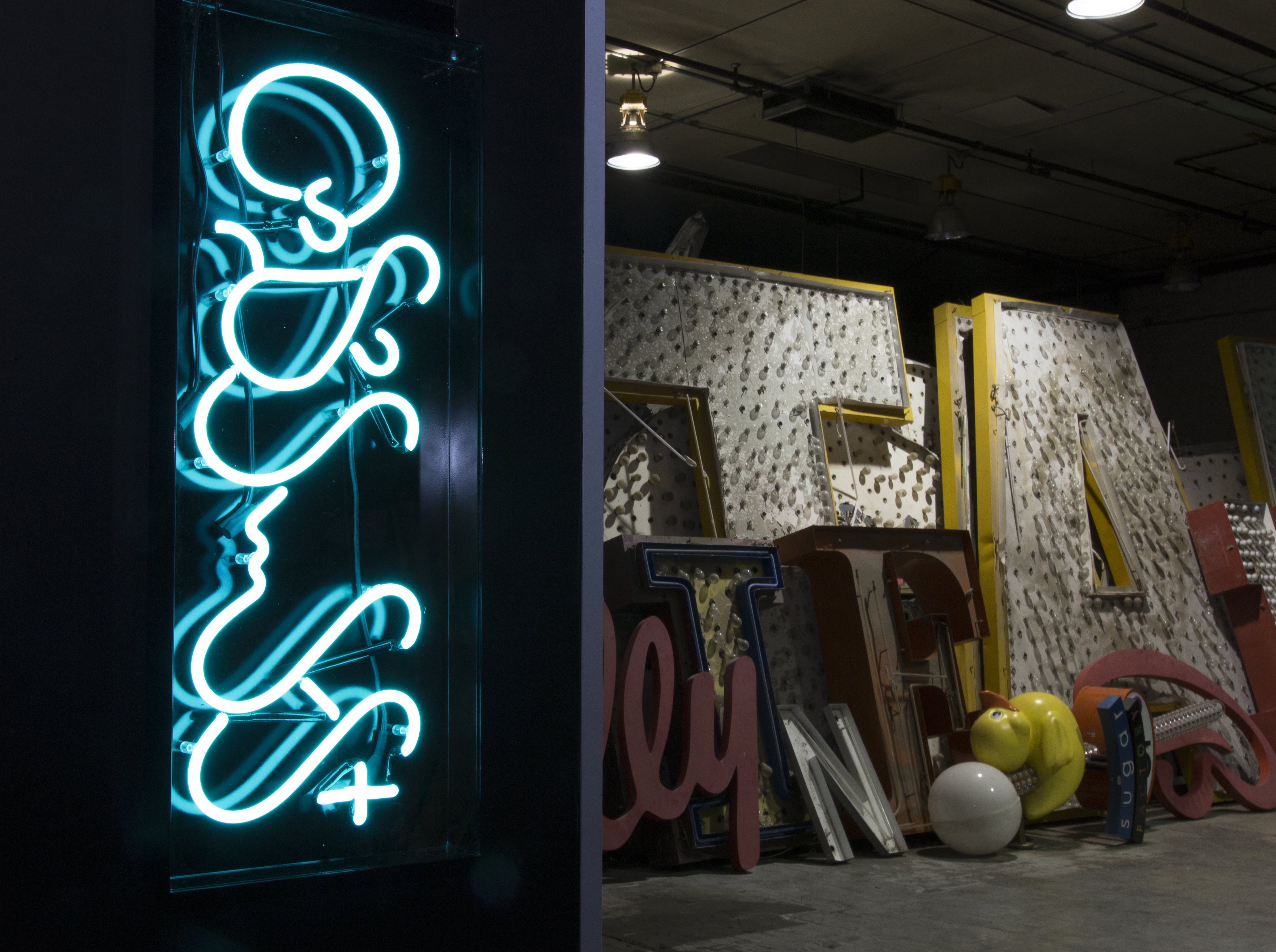 “I wanted to talk a little more about the neon sign and what the inspiration was for that. It's an old Filipino script. It’s called Baybayin and the script actually says “bumalik”. Bumalik means “return” or “come back” in Tagalog and it is a reference to the title of this whole project which is called ‘Come You Back to Maynila Bay’.

Tying it in with this project, I’ve been thinking a lot about inclusivity. When I was installing this space, both here and in New York, and thinking about what I wanted to say to guests when they were coming in, I really wanted to prioritize that this is an inclusive space; it is an intergenerational space. That was important in thinking about how a lot of these gambling spaces are orientated towards adults. Kids are not necessarily welcome in them and if you don’t have money, you’re not necessarily welcome in them. There’s not much you can do in a casino if you don’t have anything to play with. That’s all been part of conceptualizing this project as a free gambling space where obviously there is no money on the line, but there is something else – there is art. There is also this idea of spending time with people that you may never have met before. It is a community gathering. So that is a play on this idea of gambling spaces that are getting people to come back, to return. In this case, it is a return to a home. And then that ties in with my grandma who influenced this project, who wanted her husband to return home.

Another thing I’ve been thinking about with the collection at the Neon Museum is that there are no signs in the Neon Museum collection that are not in English, or at least not in a language that doesn’t use roman letters. But thinking a lot about that language – Babayin, that script – essentially it was forced out of use in the Philippines by Spanish Colonization. When the Spanish came they burned a lot of these old documents that had Babayin. Not a lot of these old historical scripts actually remain. It has taken until this last year for the Philippines to recognize that this script is part of our national heritage and something that should be taught.”

"I made great progress on the third and final paper sculpture. These are the three gods that govern the major suits of this mahjong set. In the original Chinese set, the three that I would consider the most valuable tiles are the Red Dragon, the Green Dragon and the White Dragon. I decided to translate the three dragons into the three gods from the Tagalog creation myth. I looked to see if there were dragons in Philippine mythology but couldn’t find many examples, so I decided to go this route. Their names are Bathala, Amihan and Aman Sinaya and they are the gods of the sky, land and sea, respectively. For reference, the god Bathala is the one in red with the wings that soars over the sky. Aman Sinaya is the blue one who has a serpent’s tail and references the Bakunawa which is a Philippine dragon that supposedly roams the lakes of Manila. And the final one in-between is Amihan which a lot of people have their own interesting interpretations of. People think it looks like a fruit, people think it looks like a mango, but the interpretation that I was going for is that it is an egg. The carvings on the egg mimic both the feathers of Bathala and the scales of Aman Sinaya. I like this idea of the egg that has yet to hatch, that is yet to be either a bird or a serpent – is yet to be either of land or sea. It is of that realm in-between.” 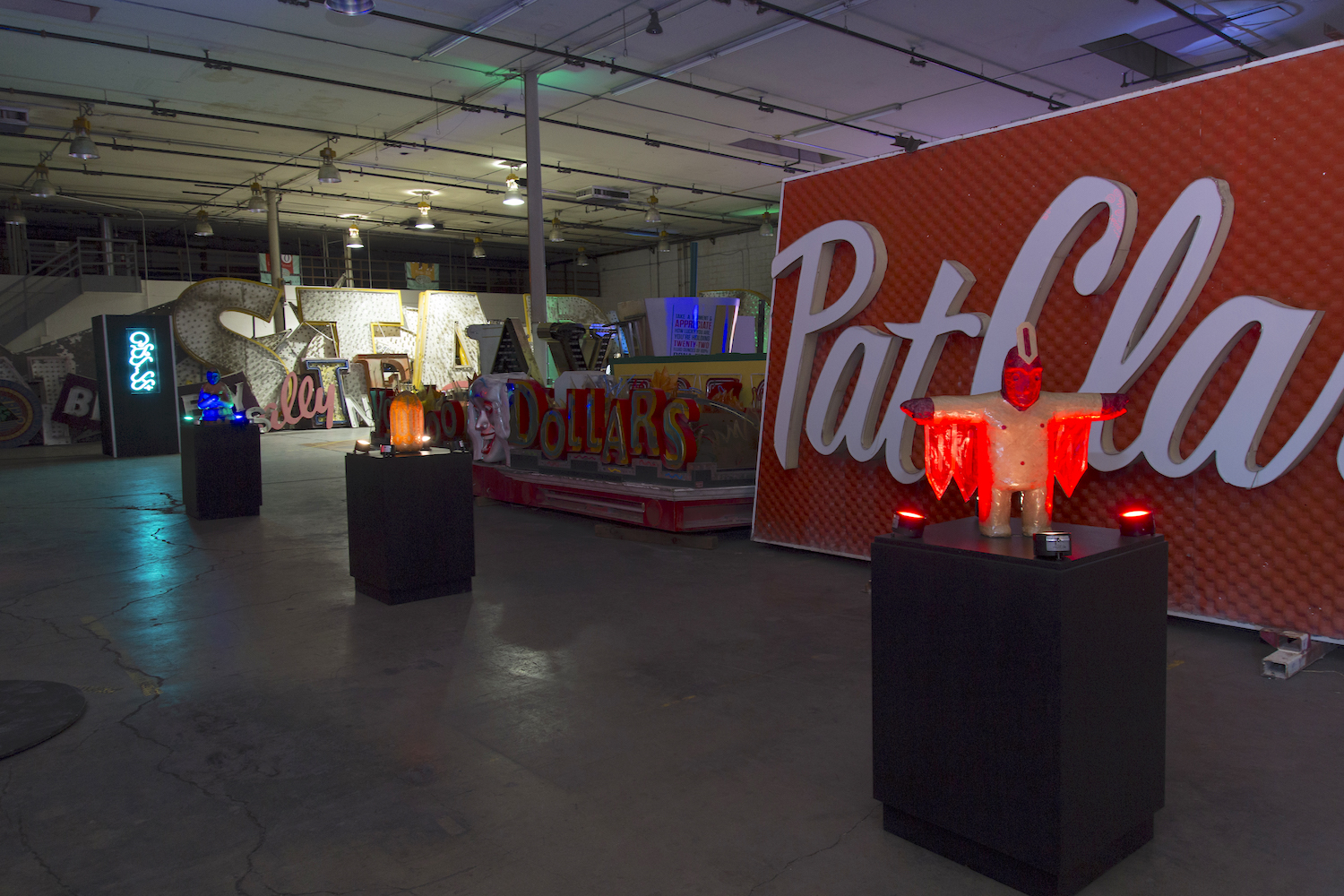 “Final recap, just talking about how the last week went in preparation for our Open Studio. I thought the event was really, really great! It seemed like we had a big turnout. It was cool seeing a lot of new faces. On top of that there were a lot of family, friends, local artists and community members here in Las Vegas who have been so supportive over the summer. People got a kick out of seeing their [winning mahjong] hands on the wall and a lot of them were surprised that I was able to locate them on the wall. But I was telling them more about the organization and the serial codes on each. I think they got a lot of joy out of seeing their win be recognized.

I had this idea earlier in the day of ending the night with a final game with family members. I invited four family members – my mother, my cousin Fernando, my cousin in-law Herb and my aunt – my Tita Susan. I wanted my grandma to play but the lighting was a bit difficult for her to read the tiles. However, midway through my grandma actually sat beside cousin Fernando like a good luck charm and held his hand. At that point, my mom was doing really well and I was kind of thinking that she would run away with it. But the game dragged on and it was quite dramatic actually. When it got down to the last thirty tiles or so, Fernando ended up winning! It was because of the luck of my grandma! We took him to the winner’s podium and the printing table and everyone got to see the final bill printed. I was so happy that we got to do at least one performance of the playing and the printing.”

The Neon Museum National Artist Residency takes place for eight weeks over summer in the Ne10 Studio warehouse and is accompanied by programming to engage the community. This project is funded in part by a grant from the Nevada Arts Council, a state agency, and the National Endowment for the Arts, a federal agency.