While looking back at some of the signs no longer with us, we rediscovered a few Las Vegas icons we only thought were missing.

Some were hiding in plain sight, while others reappeared in unexpected places. Here they are again, once lost and now found.

The Bird Cage Club and The Mint

The Bird Cage Club opened in downtown Las Vegas on New Year’s Day, 1958. Despite its location on the so-called “Lucky Corner” of First and Fremont Streets, the casino closed after just 16 months. 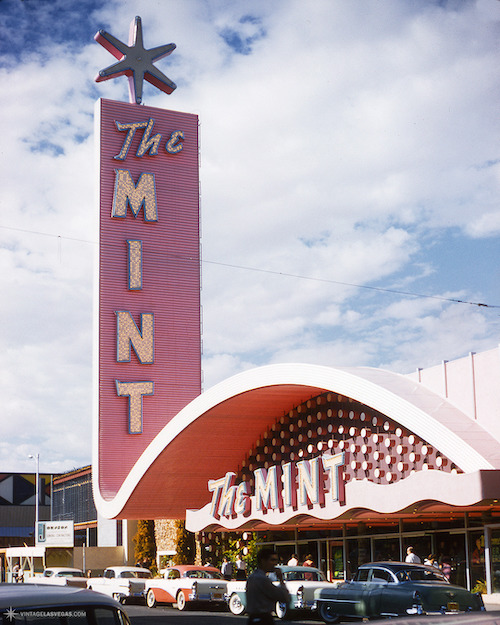 The Mint, 1957, Vintage Las Vegas. The future Birdcage and its petrified wood wall are on the lower left. 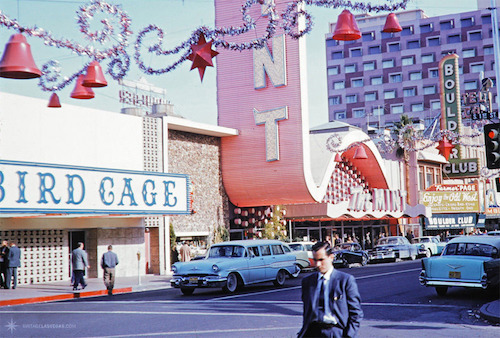 One enduring feature survived the casino’s demise—a two-story wall of petrified wood. The neighboring Mint Hotel kept the wall after it expanded into the property in 1960. It can be seen behind country star Patsy Cline in a photograph taken during her appearance at the hotel’s Merri-Ment Theater in December 1962. 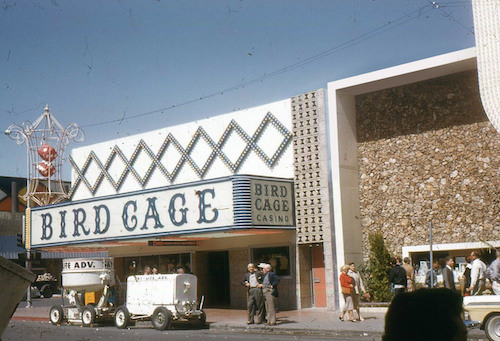 The Birdcage, circa 1958, Vintage Las Vegas. Two years later, the Mint expanded into this space. The bottom of the Mint sign can be seen in the extreme upper right-hand corner. 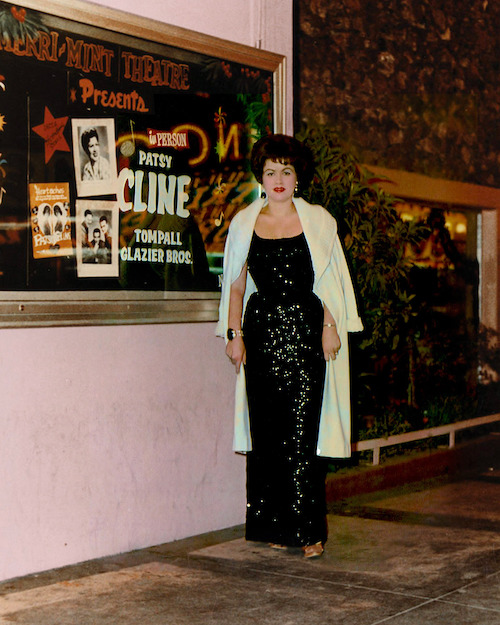 Patsy Cline at the Merri-Mint Theater, December 1962, Kathy Hughes. The petrified wood wall is on the upper right corner.

The wall disappeared from view sometime during the 1970s, most likely when the hotel added a marquee in 1975. The Mint sign was partially dismantled after Binion’s Horseshoe purchased the property in 1988 and was assumed by some to be completely lost. 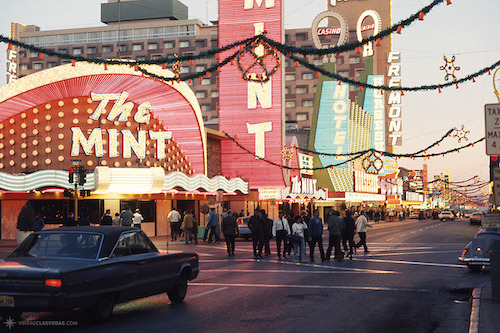 December 1970, Vintage Las Vegas. The wall can still be seen at the center of this photo. 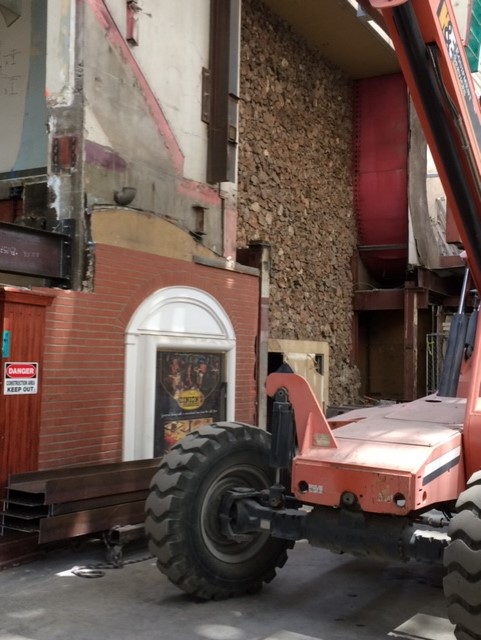 Binion's Whiskey Licker Up under construction, August 2, 2019, Mitchell Cohen. The Mint sign is on the upper right.

In 2019, Binion’s began construction of the Whiskey Licker Up Saloon, stripping away portions of the existing signage. For the first time in more than forty years, visitors could see not only the petrified wood wall but also the bottom portion of the Mint sign, still sporting its signature pink paint.

Today, the wall and sign remain on display in the stairwell to the bar, which also contains a tribute to Patsy Cline. 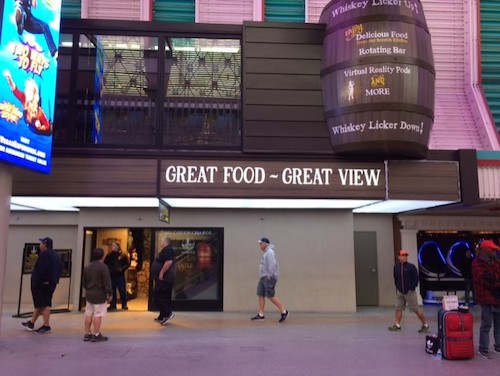 Completed Whiskey Licker Up at Binion’s Gambling Hall, December 20, 2019, Mitchell Cohen. The area where Patsy Cline stood in 1962 is on the lower left. 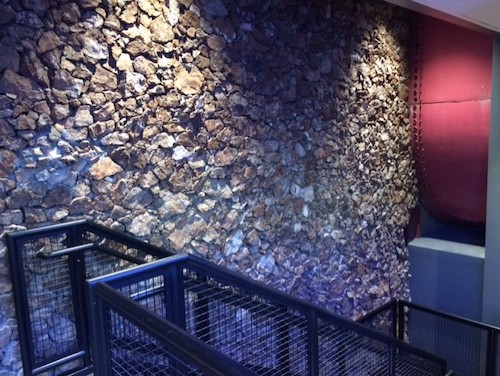 The Dunes got a fresh look in 1982 with the addition of the Oasis Casino. Its sleek, black-mirrored architecture demanded equally dramatic signage. Raul Rodriguez, whose creative flair was already on full display at the Flamingo, developed the preliminary design concept. Additional design work was completed by Jack Dubois of AD-ART, the company that built and installed the sign. 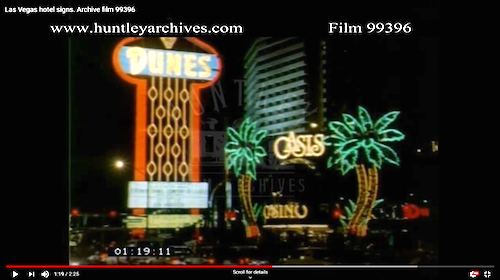 Although smaller than the Dunes’ 180-foot pylon sign, the Oasis signage was still enormous. The palm trees stood 70 feet tall, with fronds 20 feet long. The movement of the neon in the pylon and Oasis signs was cleverly complimentary, each display working in tandem with the other. 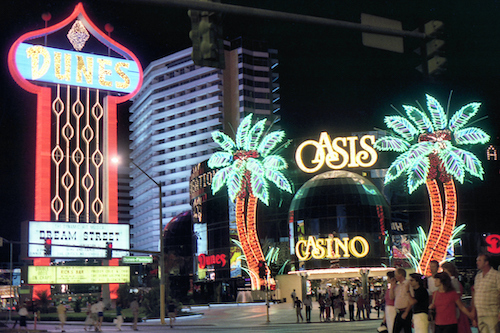 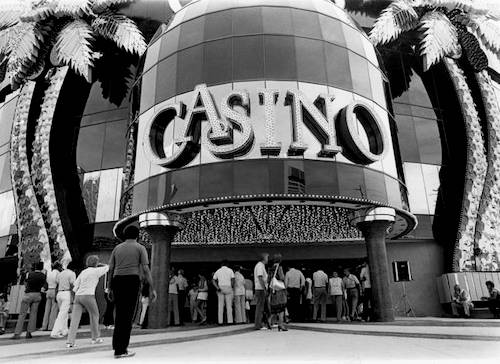 The Oasis Casino at the Dunes around the time of its opening in August 1982, Las Vegas Sun

In 1993, the Dunes and the pylon sign were imploded to make way for the Bellagio. Some feared that the Oasis signage was also destroyed.

Then in 1999, a trade magazine published photos of the palms outside a popular nightclub in Bangkok. The trees had been purchased and transported to Thailand. No one could have been more surprised to learn of the sign’s fate than designer Jack Dubois, who described the experience as “surreal.” “That’s a weird feeling.  I never actually had a sign saved like that.”

Today, the nightclub is long gone. There is no word whether the globetrotting palms are still standing. Who knows, maybe the trees are on the move again. 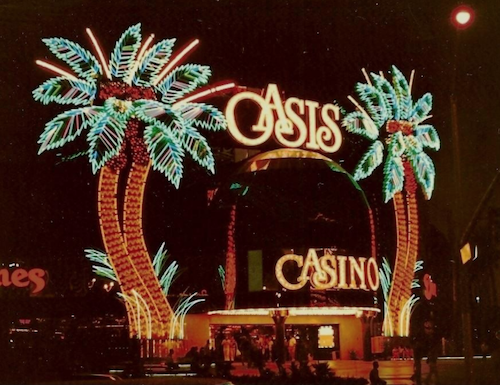 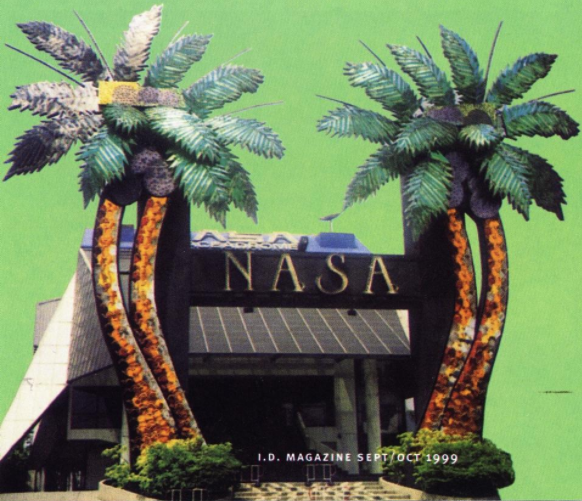 Oasis Palms at the NASA nightclub in Bangkok, Thailand, as featured in I. D. magazine (Sept./Oct. 1999), Jack Dubois

Aku Aku at the Stardust

The Stardust’s Aku Aku restaurant opened in 1960, riding the Tiki wave then washing over the country. 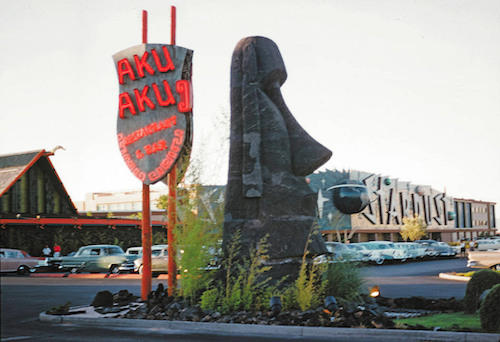 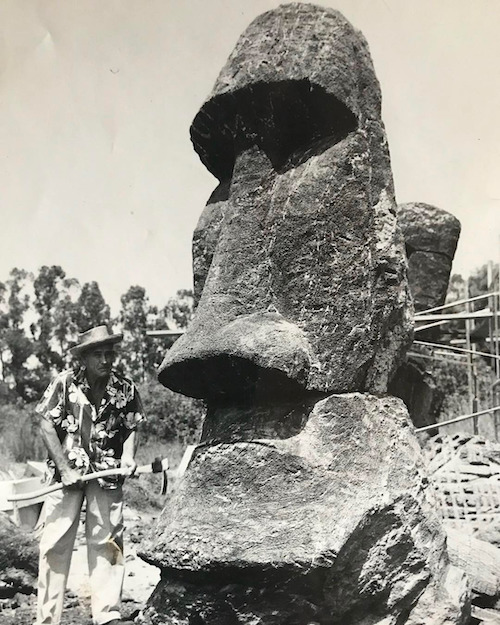 Taking its name from a popular book about the South Seas, Aku Aku offered an eclectic menu of “rare and exotic” dishes and dangerously powerful drinks broadly labeled as “Polynesian” fare. 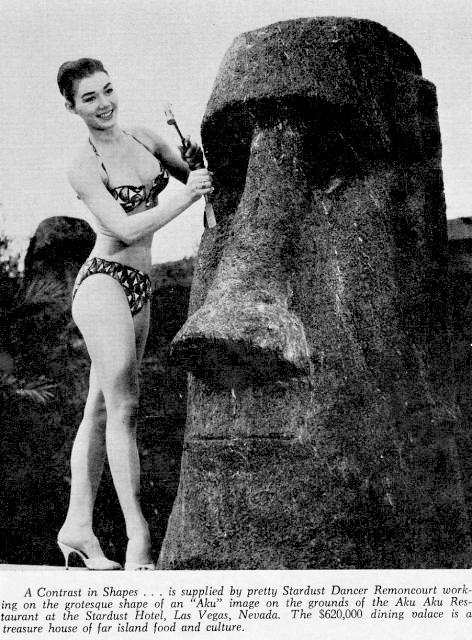 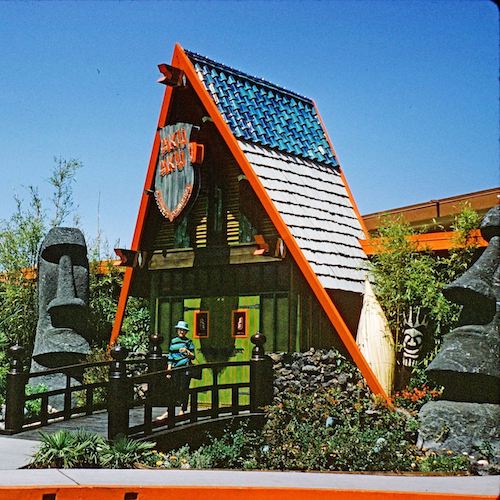 By the 1980s, the tide had gone out on Tiki, taking Aku Aku with it. The Stardust closed in 2006 and was imploded the following year.  With so much gone, it would be reasonable to assume that the Aku Aku heads were just another casualty. But somehow they survived.

The largest sculpture was given to Clark County and brought to Sunset Park. It now occupies an island in a small lake, keeping a watchful eye on the birds that flock below. The two smaller statues have, apparently, taken up residence at Tiki di Amore, a local Polynesian patio bar with an Italian menu. 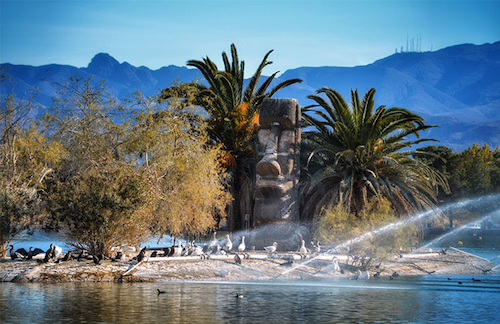 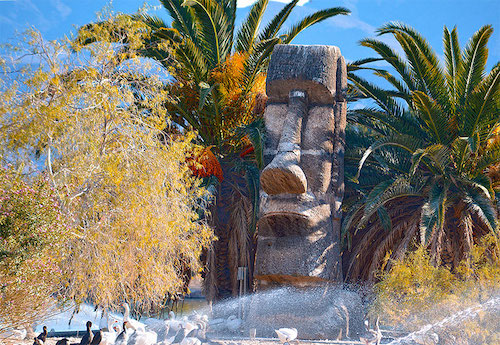 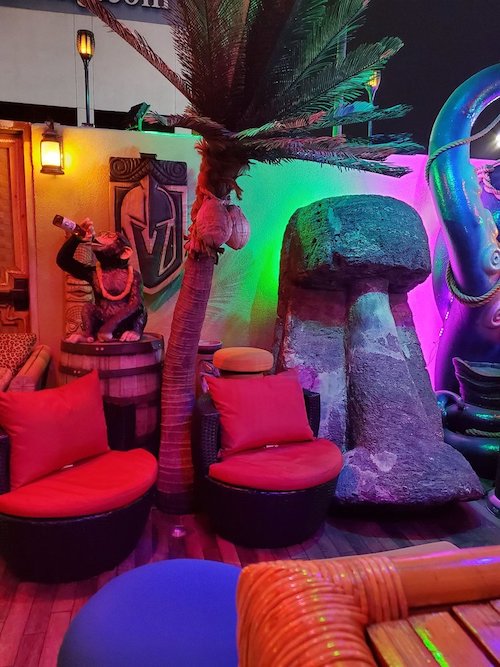 Tiki di Amore, Kelly T. on Yelp. A moai sculpture from Aku Aku is on the right.

The Aku Aku heads are not the only Tiki carvings to have taken up a new life off the Strip. Back in the 1980s, the Tropicana rebranded as “the Island of Las Vegas.” Then for a time in the 1990s, the hotel decorated the grounds with moai statues and wooden carvings of Hawaiian gods. Although the gods were carved by a noted Tiki artist, Ben “Benzart” Davis, they were on display only a short time before the Tropicana put them in storage. Today, one carving can be found outside of Frankie’s Tiki Room on West Charleston Boulevard. Lono, the god of peace and prosperity, extends well wishes to all who enter. 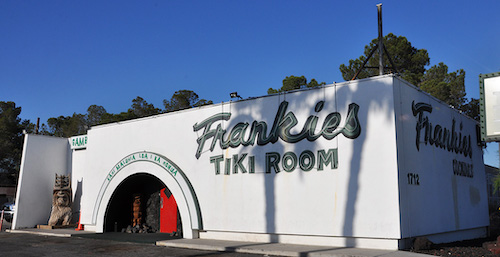 Frankie’s Tiki Room, roadarch.com. The Lono sculpture, formerly at the Tropicana, can be seen to the left of the entrance.