We previously looked back at several Las Vegas icons. Now in part two, we remember some of the quirkiest and unusual signs to ever light the city’s skies.

Along the way, we will find a few of the “only in Las Vegas” stories behind the signs.

The Texaco sign at the Last Frontier Village was a striking example of early neon along the Las Vegas Strip. 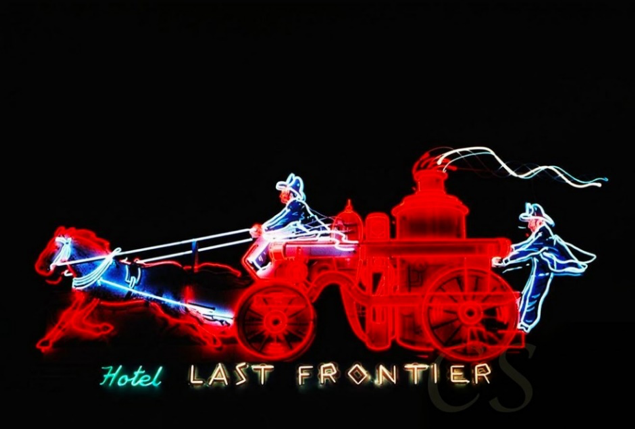 The Last Frontier was one of just two resorts on what was then known as Route 91 when it opened in 1942. Five years later, the hotel began construction of the Last Frontier Village, an idealized recreation of a western town that the public could visit for free. Developed as a tourist attraction, the village foreshadowed the rise of themed properties in Las Vegas decades later.

The first glimpse of the village seen by visitors was a Texaco station designed to resemble a 19th-century firehouse. The firehouse sign enthusiastically embraced the historically questionable concept of a frontier filling station.  Racing above the gas pumps was a horse-drawn fire wagon rendered in red neon. True to the Last Frontier’s motto of “The Old West in Modern Splendor,” the station offered travelers not only gas but deluxe bathrooms complete with complimentary showers. 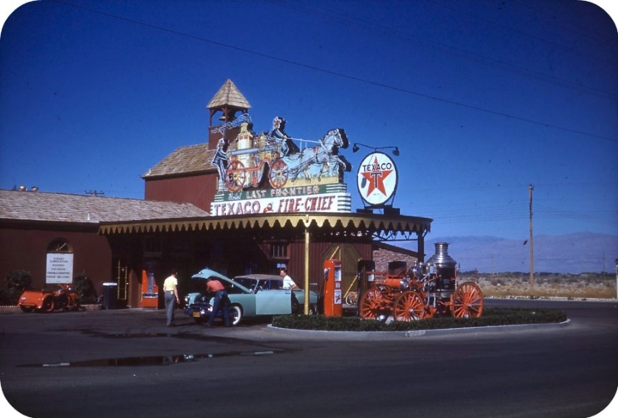 The fire wagon answered its last alarm in 1966 when the old hotel was torn down to be replaced by a newer building. Today, the property is a vacant lot across from the Encore hotel. 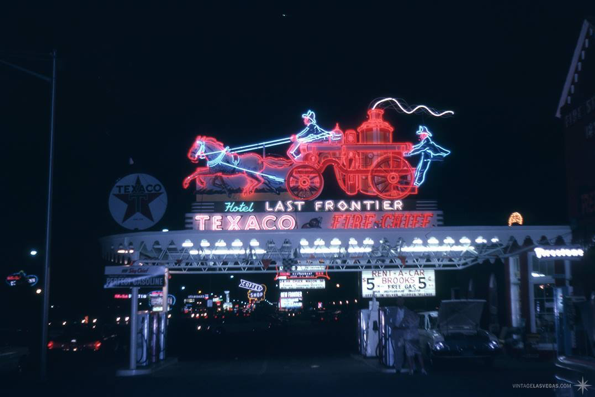 The first Westward Ho motel opened on Las Vegas Boulevard in the 1940s. By the 1960s, it had grown into a chain of five properties along the Las Vegas Strip. Two locations between the Stardust and Circus Circus hotels later merged and gained exclusive use of the name. 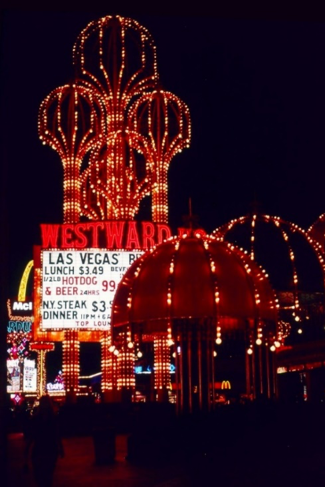 A dazzling exception to the Westward Ho’s no-frills image was its umbrella-themed promenade and pylon sign. Created by Brian “Buzz” Leming of Sign Systems Inc. (SSI) in 1983, the signage was both original and fun. The design deliberately diverged from the resort’s western theme. Leming summed it up simply: “It’s not a theme deal. It just looks good." Fellow designer Marge Williams, who helped create the acclaimed Riviera façade in the late 1980s, named it as one of her favorite signs. “It was unique…who would think of doing what they did?” 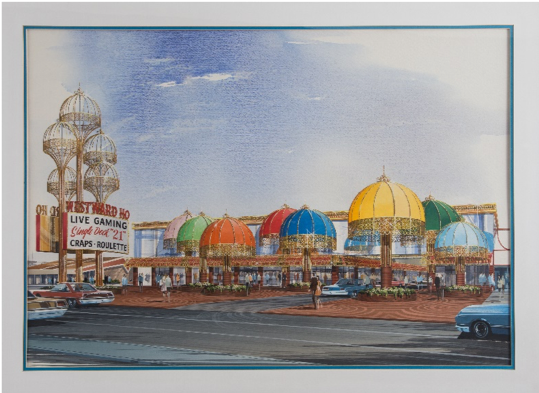 The Westward Ho was owned for many years by Dean Petersen and his siblings. Petersen tried to keep a low profile, shunning interviews and publicity. His quiet life was interrupted on October 9, 1969, when two men shoved him into a car and transported him to Reno, where they held him for $800,000 ransom. The kidnapping ended safely with Petersen’s escape and the apprehension of the kidnappers.

The end came for the Westward Ho on November 17, 2005.  Guests danced out the doors clutching promotional materials as souvenirs while a band played “When the Saints Go Marching In.” The property was demolished in 2006. The location is now the site of the future Resorts World. 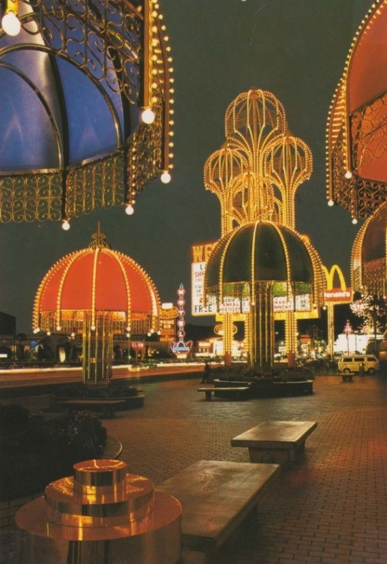 Foxy’s Firehouse was a small casino with a big sign.  It stood at the corner of Sahara Road and Las Vegas Boulevard from the mid-1970s until 1988. 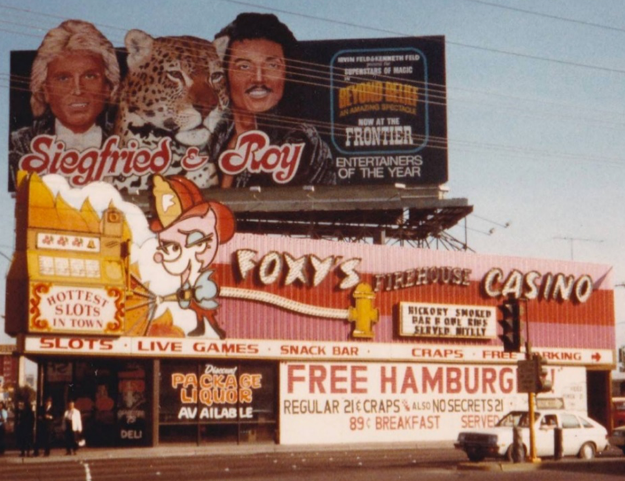 The site was previously home to Foxy’s, the city’s first Jewish deli, which operated from the mid-1950s until 1975. The deli was a favorite venue for many performers and, during segregation, the only restaurant near the Strip where African American entertainers could go for a meal. Owner Abe Fox commissioned a white neon sign featuring his namesake animal for the entrance. 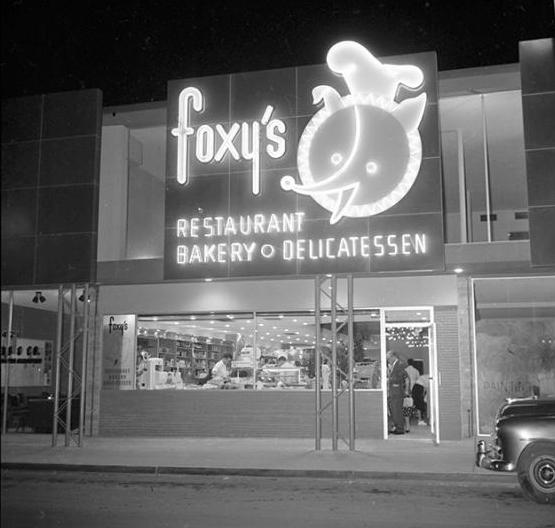 When the casino replaced the deli, the new owners erected a sign inspired by the restaurant’s motif. The display featured a neon firefighting fox dousing flames blazing from the “Hottest Slots in Town.” 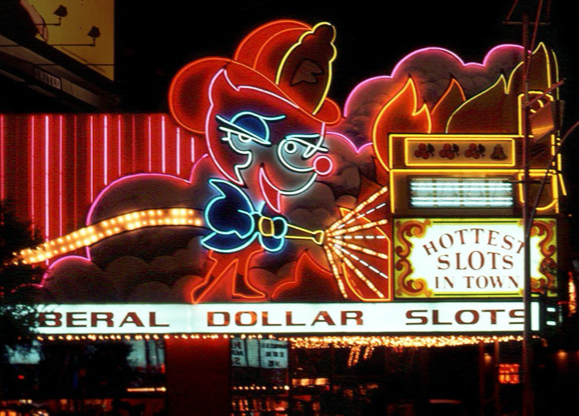 After the casino closed, the site became the location of Holy Cow Brewery, which local historian Lynn Zook has credited as Las Vegas’ first microbrewery. Later, Ivana Trump eyed the property for condominiums, but the project never materialized. Today, it is the location of a Walgreens store.

Be on the lookout soon for part three which will spotlight some even quirkier signs.