In part three of the Lost Signs of Las Vegas, we take a look at signs from smaller properties that longtime locals and frequent visitors might remember.

They take us back to the 1960s and 1970s, a time when even modest businesses used over-the-top advertisements. 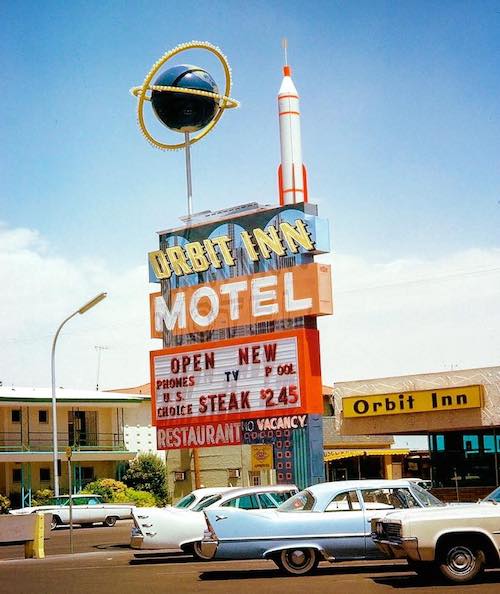 The Orbit Inn launched on Fremont and 7th Streets in 1963. It was the home of not one but two Space Age signs. The first featured a rocket and a globe encircled by orbit trails. Author Tom Wolfe cited it as an example of Las Vegas’s unrestrained “Late American Rich” style. The rocket portion of the sign was replaced by a more functional “Motel” element in the 1960s. 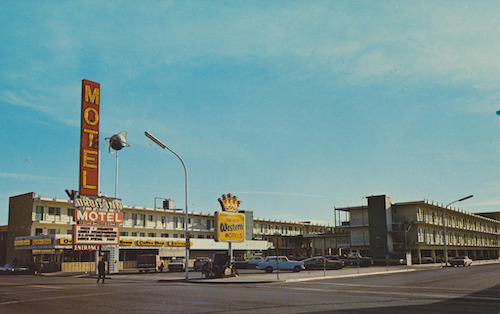 Sometime during the 1970s, the original sign was zapped by a flying saucer, which hovered over the property until the 1980s. 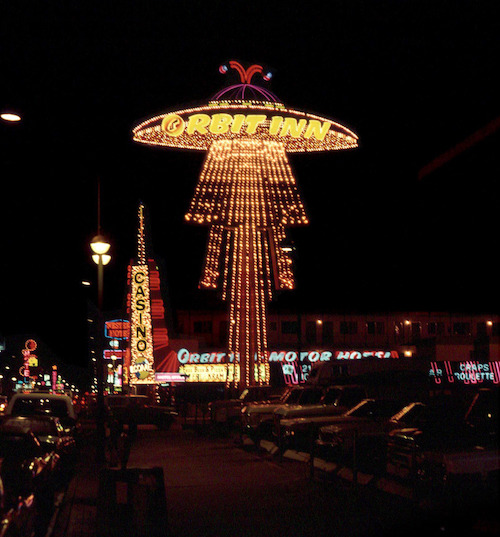 Sadly, the motel is best remembered for a tragic explosion on the morning of January 7, 1967, when an Army deserter killed himself and five others by shooting a pistol into a stack of dynamite. 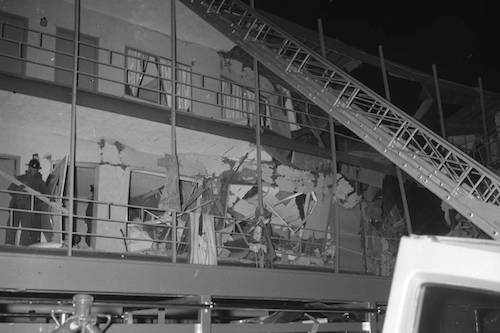 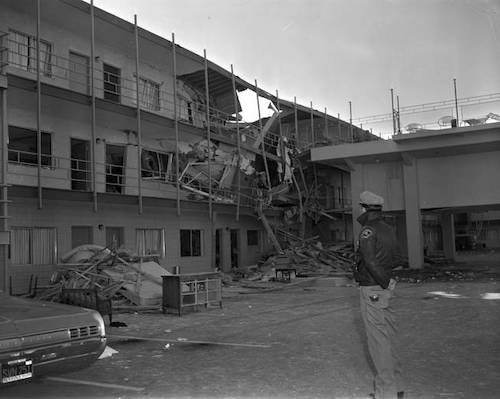 Former Sheriff Ralph Lamb noted, “That was a big thing when they blowed that Orbit Inn up, you know.” District Attorney George Franklin dryly observed, “A man doesn’t accidentally take 50 sticks of dynamite up to a motel room with him.” 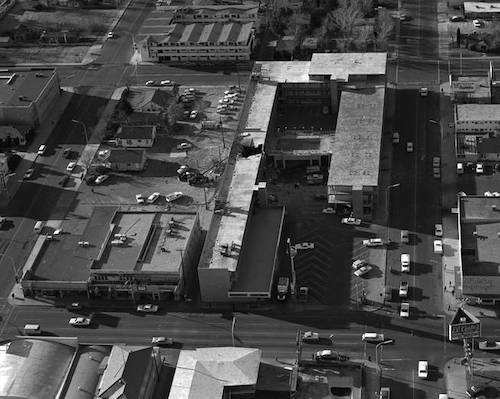 The Orbit Inn closed in 1987. Today, the site is the location of the Downtown Container Park. 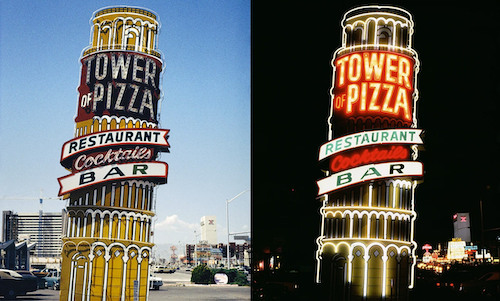 This Italian eatery impressed both Hollywood and the Ivy League. The tilted neon sign was designed by Ben Mitchem in 1964. The business was originally located near the intersection of Harmon and Las Vegas Boulevard, where City Center is today. The establishment’s reputation as a hangout for mobsters earned it a mention in the movie “Casino” as the thinly veiled Leaning Tower Restaurant.  Yale professors Robert Venturi and Denise Scott Brown had their own slant on the sign, featuring a photograph of it in their groundbreaking architectural study, “Learning from Las Vegas.” 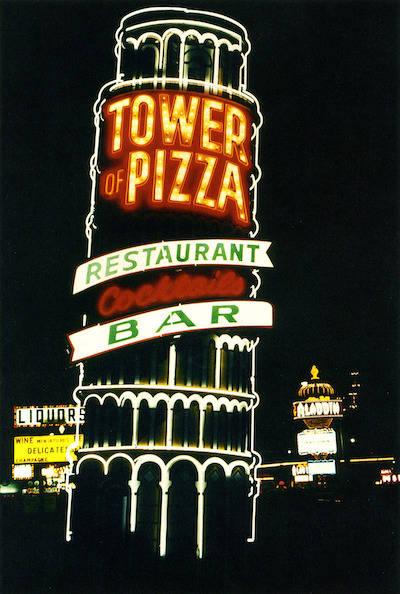 The restaurant moved to Henderson, Nevada in 1984. The sign was damaged and later scrapped in 1987. 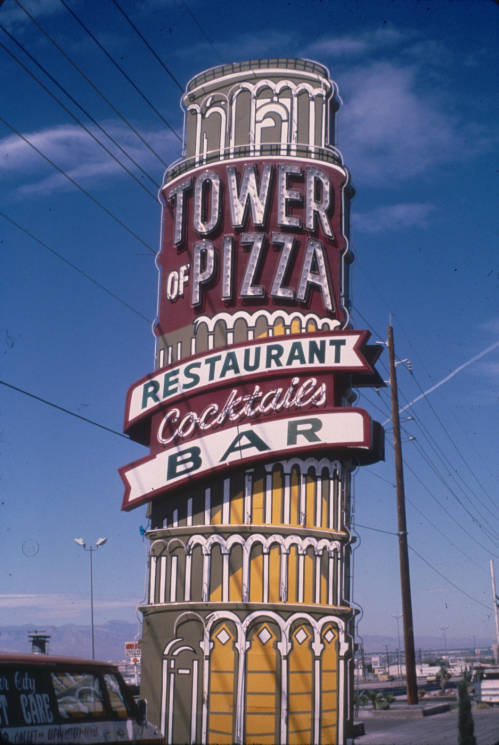 The winking Steak Corral chef stood at the intersection of Charleston and Las Vegas Boulevards from 1966 until the mid-1970s. 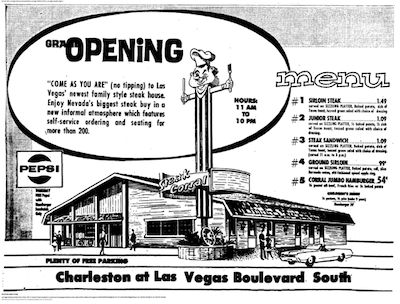 The site had been the location of Sill’s Drive-In Restaurant in the 1940s and 1950s (“Good food need not be expensive”) and then Tip Top before becoming Steak Corral. 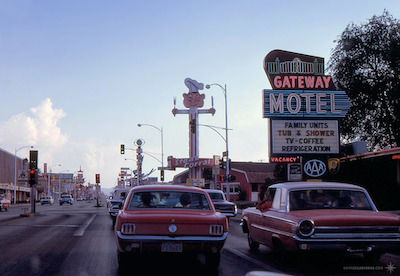 Steak Corral, intersection of Charleston and Las Vegas Boulevards, July 1967.  The Gateway Motel and sign seen in the foreground remain at this location, VintageLasVegas.com

When it opened, the restaurant touted self-service, no tipping and a steak sandwich platter complete with baked potato, a “slab of Texas Toast,” and a green salad for $1.09. The location is currently a 7-Eleven convenience store. 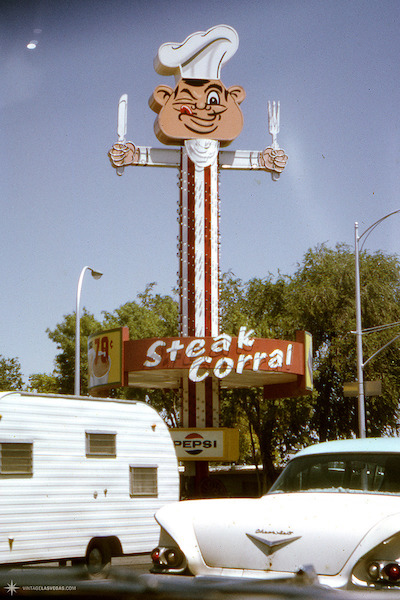 Only one of the sign’s eyes was lit at night, transforming the friendly chef into a knife-wielding cyclops. 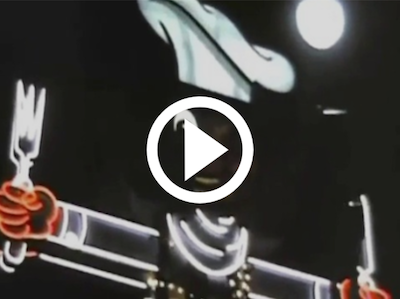