Henson’s multidisciplinary artistic techniques lent themselves to a fresh interpretation of the myth, lore and narrative behind Las Vegas. The larger-than-life signage housed in the Museum's Ne10 Studio served as inspiration for the works she created. 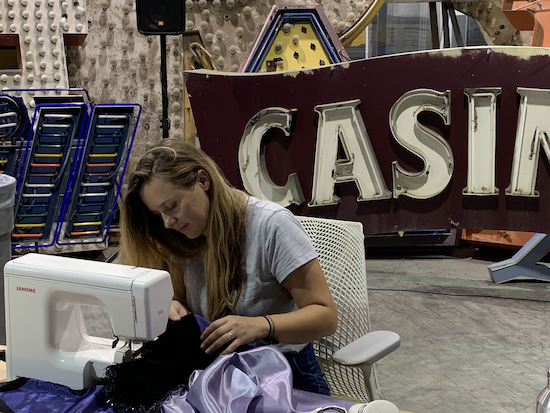 “Coming into the Ne10 Studio was almost overwhelming,” noted Henson. “I’m someone who likes working with scale, generally, so it has been really inspiring to be around these objects that are made to be seen from such a distance and getting the opportunity to be up close and personal with them.”

Henson also called upon the City of Las Vegas as inspiration for her works.

“This city appears to be rooted in its own mythology and it uses signage, images, and performances to reiterate those ideas across the city,” Henson observed. “The idea of Las Vegas is that it lives within its own history and it is constantly rebuilding that. And so it lives as much within its past as it does its present.” 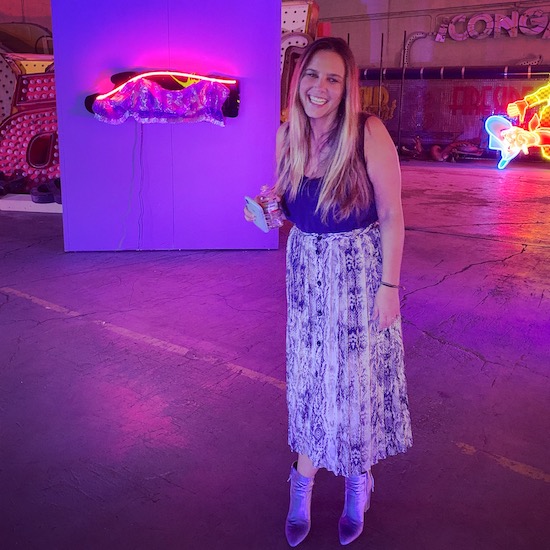 “Las Vegas is a perfect place to explore big ideas like the American Dream, westward expansion and what we think of as being ‘Americans,’” Henson reflected. “Las Vegas not only has all of those over-the-top performances and experiences but it also reinforces a variety of ideas that we share as a culture.” 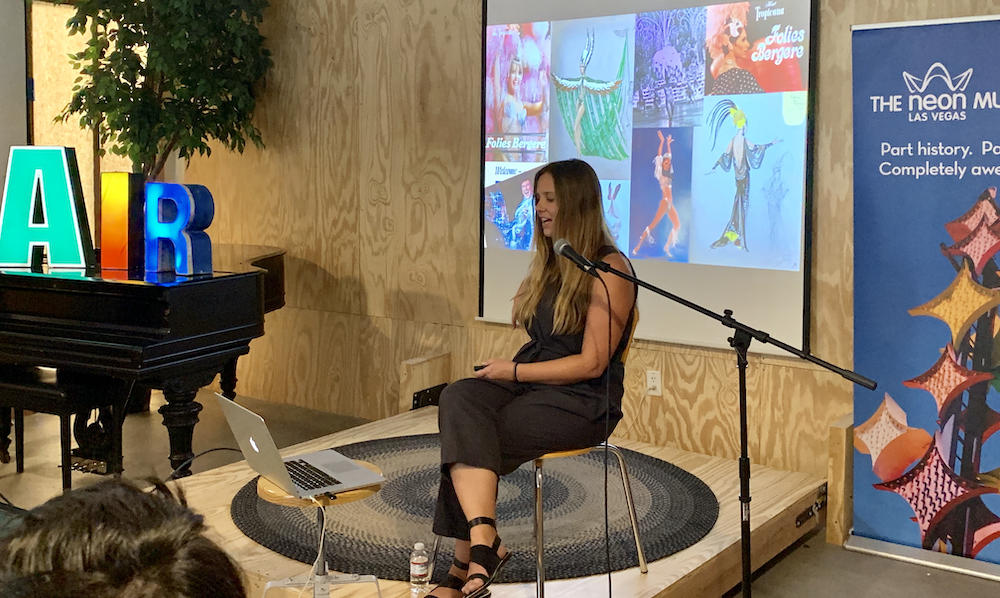 Henson kicked off her residency on July 11 with an Artist Talk at the Writer’s Block at The Lucy, the arts and culture hub sponsored by Beverly Rogers. The talk introduced attendees to Henson’s artistic influences, which range from charismatic television evangelists caked in layers of stage makeup to everyone’s favorite sassy swine, Ms. Piggy. The artist shared examples from her multidisciplinary catalog and wove a narrative of the common thread of theatrics that have connected these collected works.

Much of the work Henson has created during her time here at the Museum gives a nod to the performative nature of Las Vegas. Sequins, sparkles and satin materials, often found in the glamorous costumes of showgirls and headliners alike, grace the curves and contours of her fabric sculptures. Hard metal edges found in massive signs have been softened through the artist’s touch. 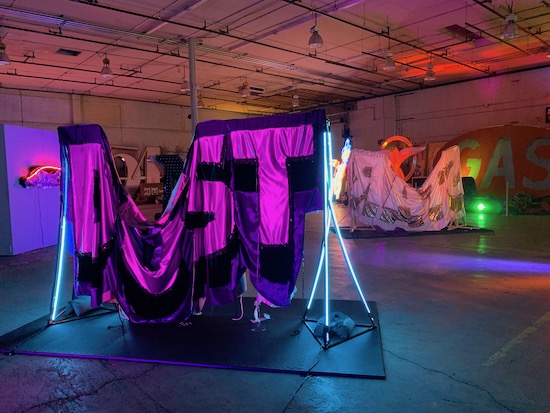 “The objects that I make use material as a way of interpreting the underlying ideas in the work. Costumes for me represent this idea in a very direct way,” shared Henson. “They reinforce myths and narratives through how they are built and how they are meant to look and how you are supposed to interpret them. The goal is once they are translated into these soft materials, to fold and bend and stretch in different ways, and to soften the language of these over-the-top, bright, almost masculine objects that exist throughout the city.” 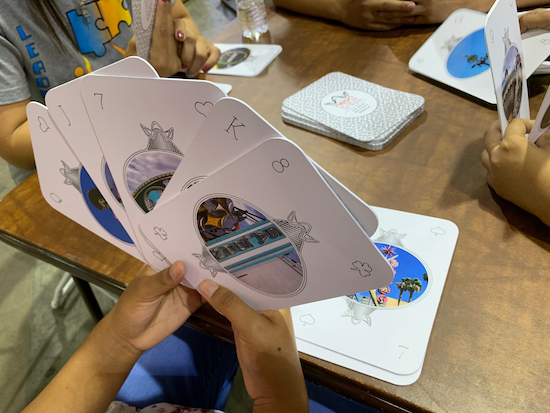 Henson also turned her attention to creating an interactive game in which players come to their own interpretations of the reoccurring myths and overarching themes found in Las Vegas signage. Henson designed a set of playing cards with images of Las Vegas signs. The game resembled “Go Fish,” in which players competed to create “sets” of cards that corresponded to the themes of the Wild West, wealth and class, exotic places or things, the future, fantasy, fun and luck. 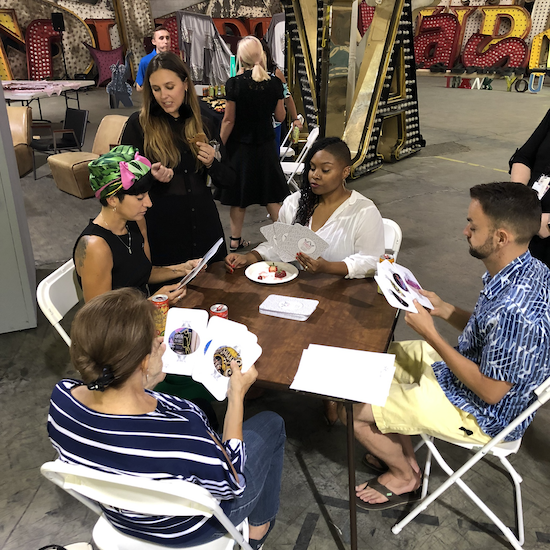 Henson welcomed a youth group from the Winchester Dondero Cultural Center to play a few rounds of the game and explore the different meanings that signs convey. She also shared the game with Neon Museum volunteers during an Artist Preview and Volunteer appreciation event on August 13 in the Ne10 Studio. 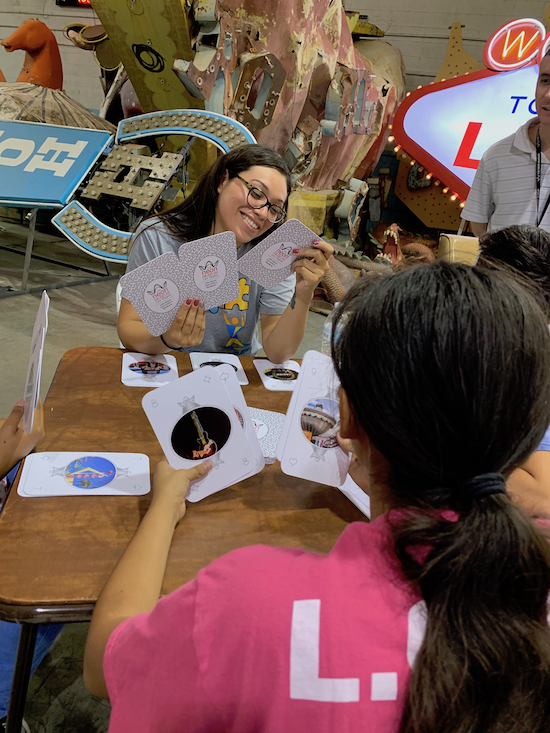 The Neon Museum welcomed the public to Henson’s Final AIR Open Studio on August 16. On display were works created during her stay including neon pieces designed by Henson and crafted by Paul’s Neon Signs. One of these pieces, which features a nod to the famed Mirage sign, will be joining The Neon Museum’s fine art collection. 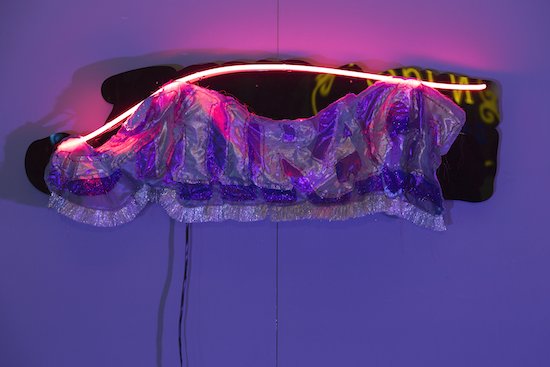 Check out our YouTube channel to see conversations we had with Henson each week of her residency.

The Neon Museum National Artist Residency takes place for eight weeks over the summer in the Ne10 Studio warehouse and is accompanied by programming to engage the community. This project is funded in part by a grant from the Nevada Arts Council, a state agency, and the National Endowment for the Arts, a federal agency.