The Neon Museum Las Vegas | The history of Las Vegas through neon - The Flamingo Finds Its Feathers: How Raul Rodriguez Created One of Las Vegas' Most Enduring Symbols

The Flamingo Finds Its Feathers: How Raul Rodriguez Created One of Las Vegas' Most Enduring Symbols

Raul Rodriguez (1944-2015) was an acclaimed artist whose talent touched everything from parade floats to hotel-casinos.

He is best known in Las Vegas for creating the Flamingo’s distinctive signage in 1976. He also developed the original concept for the Dunes Oasis display in 1981 (the final installation was designed by Jack Dubois of Ad Art). A native of Los Angeles, Rodriguez’s career in Las Vegas had an unusual start.

Hilton Hotel Corporation became the first major hotel chain to own casinos in Las Vegas when it purchased the International and the Flamingo hotels in 1970. Shortly after, the company began plans to expand and refurbish the Flamingo Hilton. The chain’s president, Barron Hilton, was unimpressed with the designs he had been shown for exterior lighting and signage. Rodriguez, who worked for Heath and Co., was brought in to meet with him.

At first glance, Rodriguez seemed to be an odd choice for the job. While his experience included work for Walt Disney Productions and Heath and Co., he was most famous for designing floats for the Tournament of Roses Parade in Pasadena, California. He created his first float when he was just 14 years old and would go on to design over 500 more, many of which were top award winners. There might appear to be little similarity between a parade float and a Strip hotel, but as Rodriguez later explained, they share a common psychology. No matter whether the float passes the viewer or the viewer passes the hotel, there are only a few seconds for the design to grab the audience’s attention and tell a story. In either case, the story must be simple and compelling. 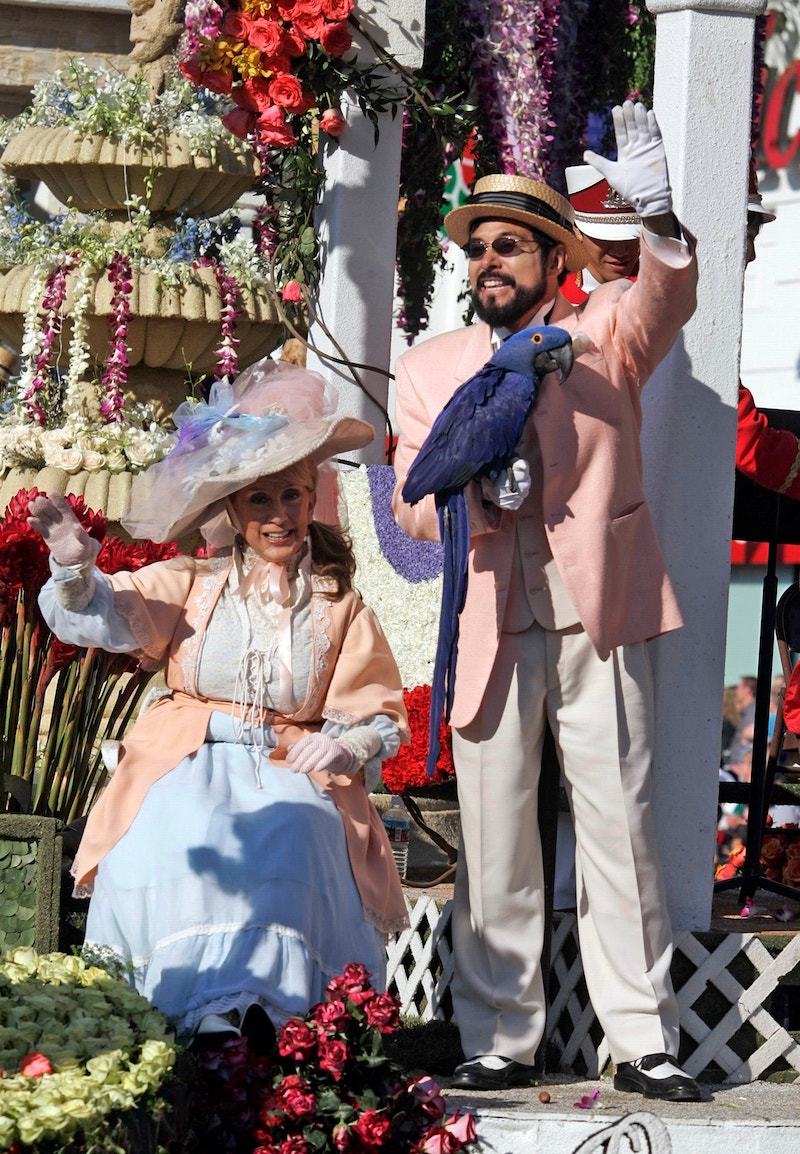 Raul Rodriguez in 2007 on a float he designed for the Rose Parade in Pasadena, California, Damian Dovarganes/Associated Press

As important as his experience was the fresh approach Rodriguez brought to the project. Where others had proposed signage, Rodriguez realized what the Flamingo really needed was a theme. He wanted to give the hotel, “an image, an image that themed the property, that gave it a significant flare.” But what image?  Rodriguez recalled complaining to Barron Hilton that the hotel gave him little inspiration. He joked that across the street, Caesars Palace “had the entire Roman Empire to work with.” What did the Flamingo offer? “I had one bird,” groused Rodriguez. And then he added, “thank God that bird was pink.” With that flash of insight, Rodriguez found his theme.

“Flamingo pink”, Rodriguez later explained, “was part of the magic.” The warm and inviting color was just right for the hotel’s entrance. It complimented skin tones, so guests felt “extra beautiful” as they entered. And, it could be seen from farther away than darker colors, attracting the attention of distant drivers. 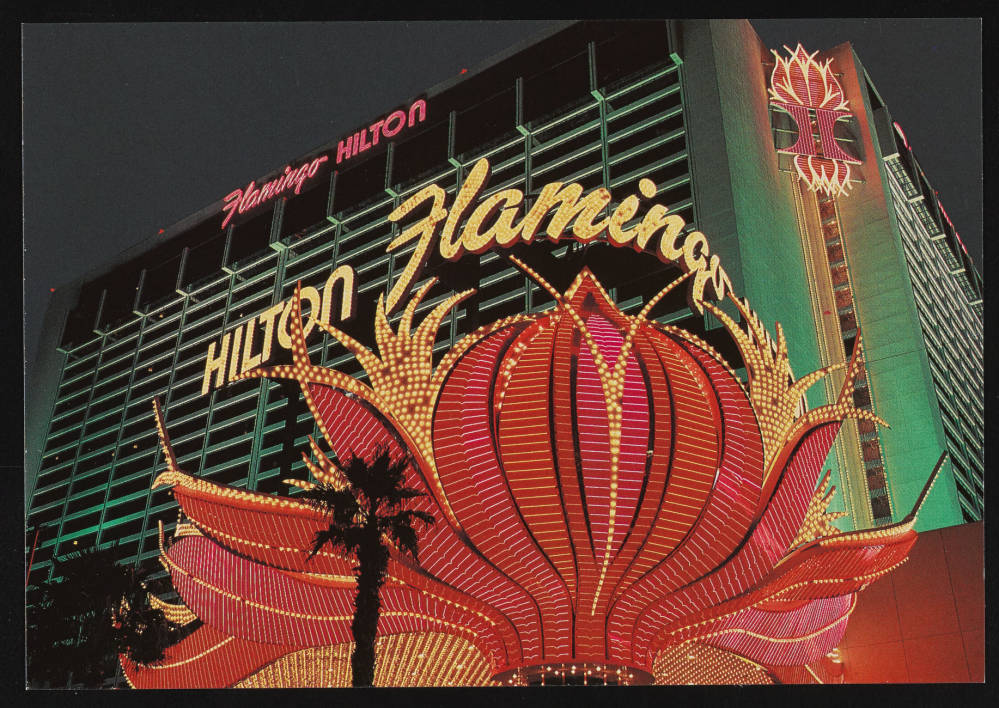 The other ingredient in the formula was bold design. Rodriguez envisioned “something that was identifiable; that was memorable; [that would make] a large impact.” He devised the now-iconic bouquet of feathers to serve as the centerpiece for the hotel’s exterior display.

The signage became so identified with the Flamingo that Barron Hilton later referred to it as “his pink calling card.” Rodriguez’s feathers still light the Las Vegas Strip, more than forty years after he created them. His accomplishment is all the more remarkable because he achieved it in the 1970s, an era when many Las Vegas properties were moving toward a bland corporate style.

The Flamingo was not the only bird in Rodriguez’s life. His inseparable companion was a blue hyacinth macaw named Sebastian, who often perched on his shoulder during public appearances. 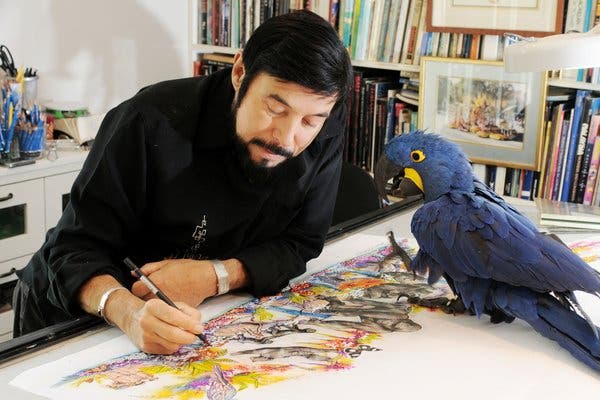 Raul Rodriguez and Sebastian the macaw, at work in 2009, Fiesta Parade Floats

During an interview conducted for The Neon Museum in 1998, Rodriguez spoke of his affection for Las Vegas and the optimism that guided his life:

"When I think about the fact that I had the wonderful opportunity to express myself and that it became a reality—whenever I hear the name Las Vegas, and you hear it over and over everywhere you go—to know that I had just a little part in something that I think is so wonderful is something that I cherish very close to my heart and I again give thanks to all the people that worked so hard on all these properties. I think that in turn, we not only gave a little of ourselves, but we take away a whole bunch of feelings. We take away really what the joy of life is all about when I think about all the creative minds that changed the planet. I really am one of the optimists because I think that the world is getting better. I really do. When people ask me in Los Angeles, aren't you afraid of the next earthquake? I say, "Remember the one we had two years ago? That was the big one." ….I like coming [to Las Vegas] and like telling everyone to come and enjoy the new visuals and the new experiences. It's quite something. So I'm very proud to be a part of this fabulous city."

Thank you, Raul Rodriguez, for your artistry, your love of our city and your faith in the future.