Propelling Nevada through the arts is a collaboration initiative between Cultural Alliance Nevada (CAN,) and Sierra Arts Foundation, with participating arts organizations curated by Reno Arts Commissioner & CAN Board Member, Mark Salinas. The invited arts organizations, from each of Nevada’s 21 Senate Districts, nominated artists to be featured in the exhibit, which is on display in the Reno Tahoe International Airport’s depARTures gallery. Designed to coincide with the 81st session of the Nevada State Legislature, the exhibition runs January 28 through May 2, 2021.

The Neon Museum, representing Senate District 2, nominated 2020 National Artist in Residence, Nigerian/American Victor Ehikhamenor. One of three artists to represent Nigeria at the first Nigerian Pavilion in the 57th Venice Biennale in 2017, Ehikhamenor is also a former Rockefeller Foundation Bellagio Fellow. He is the founder of Angels and Muse, a thought laboratory dedicated to the promotion and development of contemporary African art, and he maintains studios in both Upper Marlboro, Maryland and Lagos, Nigeria.

Throughout his career, Ehikhamenor has maintained an interest in signs, symbols and language. For his new body of work “What You Mean To Me” created during his Neon Museum residency, Ehikhamenor interprets the language of iconic Las Vegas signage in his large-scale sculptures. Exhibited in The Neon Museum’s Ne10 Studio, these new works mark a fresh avenue of exploration for Ehikhamenor through the incorporation of the medium of neon. Take a self-guided virtual tour of Victor Ehikhamenor’s “What You Mean To Me” open studio.

The Neon Museum’s contributions to the Propelling Nevada exhibit include images of Victor Ehikhamenor’s works installed in the Ne10 Studio, along with archive items. Giving an overview of the exhibit, Mark Salinas writes in Delegation + Design on the Nevada Humanities website:

“The intention of this installation was to manifest the Carson City arts community as the first and last impression on delegates’ minds. At a gathering of 187 reception attendees, enough to fill a Boeing 737, Nevada Assemblywoman Sarah Peters (District 24) stated to the crowd, “Art is the universal language. There is perhaps no greater form of expression that allows people to bridge communities and cultures together.” 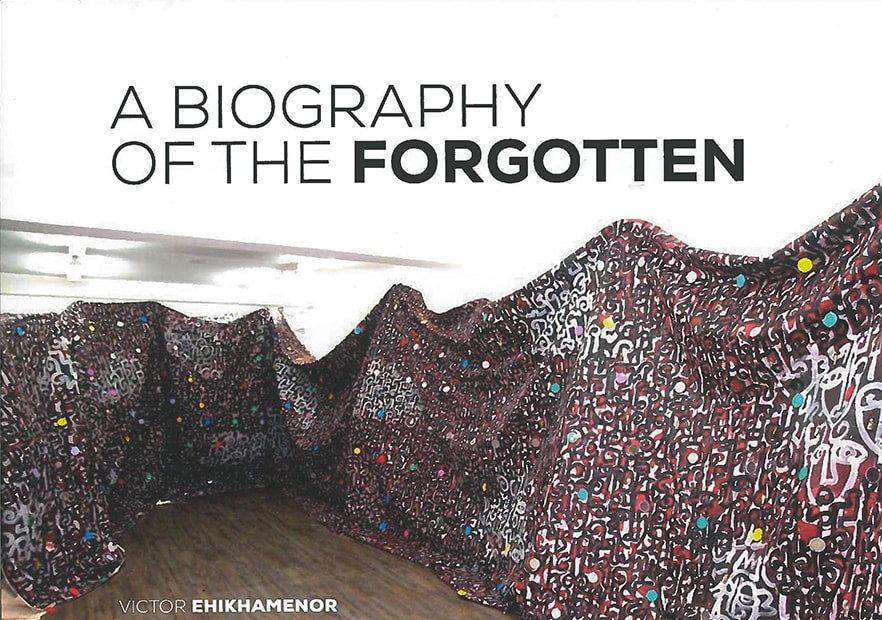 “A Biography of the Forgotten”, exhibition catalog for the Nigerian Pavilion at the 57h Venice Biennale. Published by Temple and Tyburn Gallery, 2017