Another look inside the Boulevard Gallery

Many are curious about the signs housed in the outdoor storage lot known as the “Boulevard Gallery.” While the space is currently off-limits to visitors, we have highlighted a few signs on the blog in the past. Below are some more of the signs in storage. 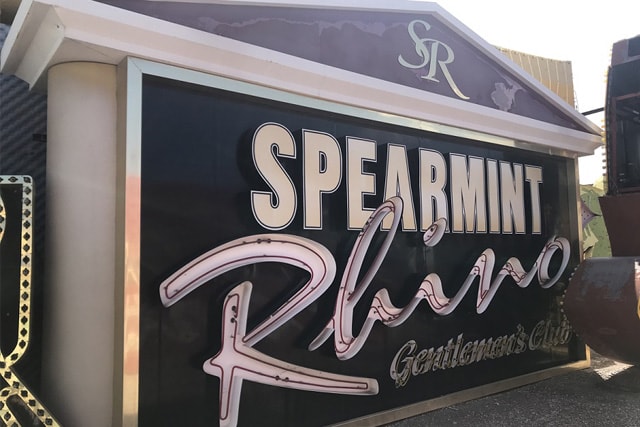 Why Spearmint Rhino?  Adult entertainment has a long tradition in Las Vegas.  In the 1950s, risqué but elegant performers such as Lili St. Cyr, Tempest Storm and Sally Rand introduced mainstream audiences to a new kind of Las Vegas Strip.  The first fully topless show, “Minsky’s Follies,” opened at the Dunes in 1957 followed the next year by “Lido de Paris” at the Stardust. 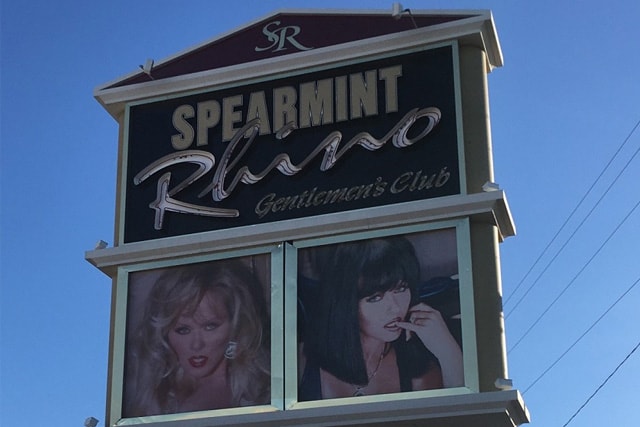 The Spearmint Rhino chain came to Las Vegas in 1999. The company’s name is a play on the title of its first location, a chain of converted family restaurants called Peppermint Elephant. The top portion of the sign was donated to the museum in 2016 when the Las Vegas location underwent a remodel. 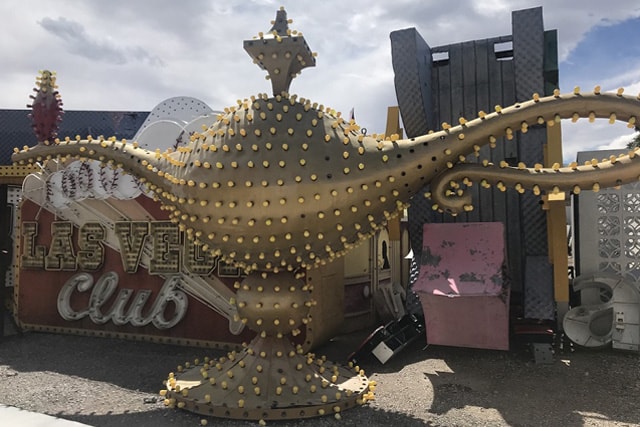 One of the most visible and recognizable signs in the storage lot is from the Aladdin. The sculptural genie lamp was part of the hotel and casino’s original sign and dates to 1966. It sat on top of a cascade of incandescent lights and was created by a team of designers at Young Electric Sign Company (YESCO). A few days before the Aladdin’s grand opening the “Las Vegas Sun” reported that the “glittering, 15-story sign designed by the Las Vegas Young Electric Sign Co. will incorporate more than 40,000 electric bulbs when finished. Cost for the neon extravaganza is nearly $750,000.” 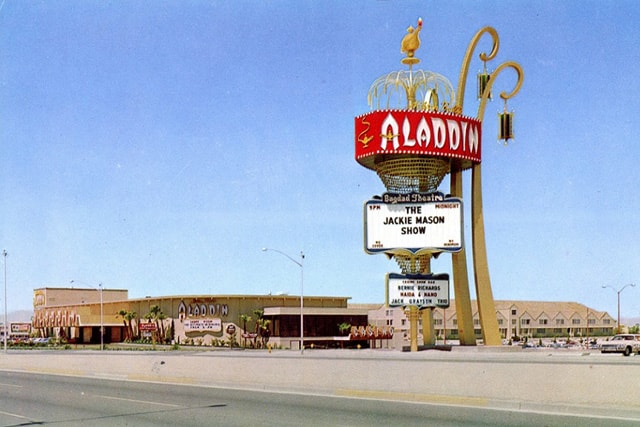 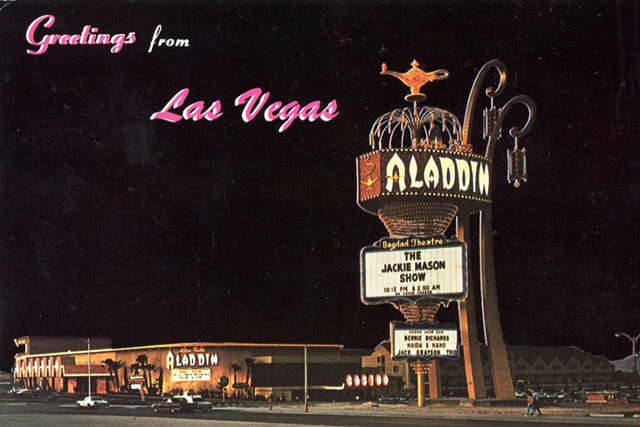 The original sign was in use for about a decade before it was replaced in 1976 by a second sign designed by Dan Edwards of YESCO. This sign included a silver lamp that sat atop a large readerboard as seen in this photo from the Federal Heath Collection. The second lamp is also in The Neon Museum collection and is on display in the Neon Boneyard. 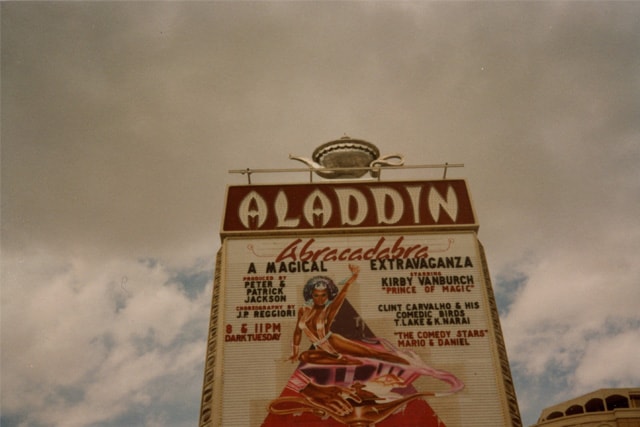 In 1986, Ginji Yasuda purchased the Aladdin and shortly after became the first Japanese citizen to obtain a Nevada Gaming license. Along with purchasing the hotel for $54 million, he also began a $50 million renovation project. The Sultan’s Treasury slot machine topper that is now in the collection was added to the Aladdin property during this period. This colorful LED and plexiglass piece was located near the Sports Book where it remained until the property closed for demolition in 1998. It is currently exhibited in our Ne10 Studio. 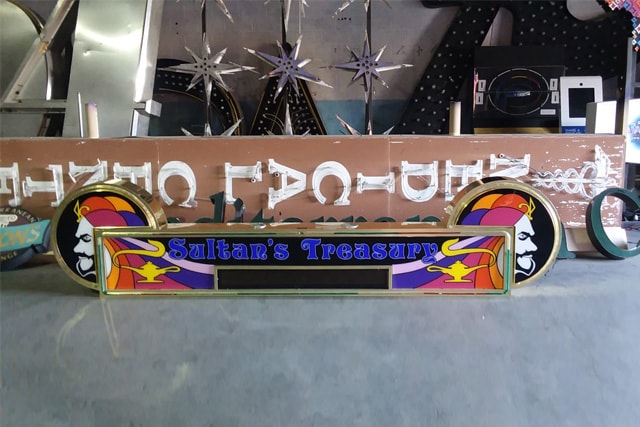 Meanwhile, after it was no longer needed the original 1966 lamp spent some time sitting in the YESCO boneyard then made a couple of movie appearances in the 1980s and 1990s. It was later restored for The Neon Museum's Fremont Street Experience exhibit and was on view from 1997-2013. 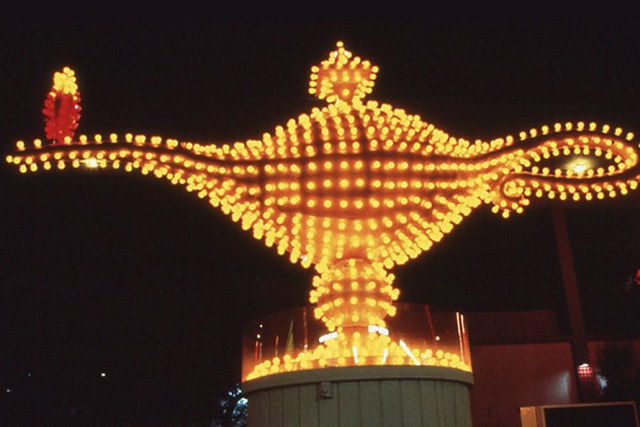 The 1966 lamp on display at the Fremont Street Experience 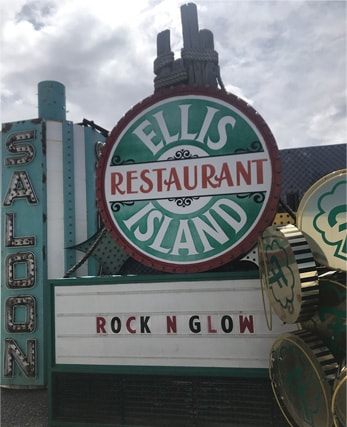 The Ellis Island sign is also clearly visible through the fence.

Opening as the Village Pub in 1968, owner Frank Ellis Jr. catered to workers on their way to and from the Strip. His son, Gary, rebranded the property under the current name in 1985. Ellis Island remodeled again in 2017 and donated the 1980s sign to the museum. The sign was designed by Brian “Buzz” Leming during his time at Sign Systems Inc. (SSI). 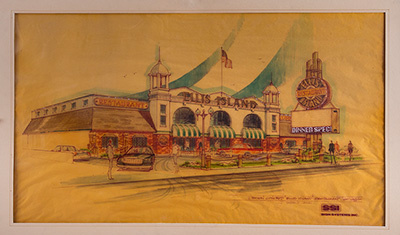